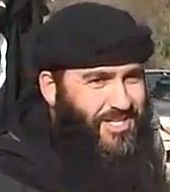 GlobalPost reports: On Dec. 10, the Obama administration officially deemed al-Nusra a terrorist organization, describing it as an extension of Al Qaeda in Iraq. The move criminalized any private support for the group. Members of al-Nusra have since dodged any questions about its Al Qaeda links in the foreign media. Al-Haj followed suit.

“Why are the US upset about Al Qaeda?” he asked. “Didn’t Hilary Clinton say they are fighting an organization they created?”

Among other opposition leaders, the general belief is that al-Nusra does not have direct links to Al Qaeda, but that much of their ideology stems from the same core beliefs. One of the few outside groups to have worked alongside al-Nusra is Suqur al-Sham, a coalition of moderate Islamists.

“Some of their thinking is similar to Al Qaeda in Iraq. But I do not believe they are financed by Al Qaeda,” said Ayachi Abdel Rahman, a Suqur al-Sham brigade leader who himself stands accused of terrorism. “They have shown a willingness to conform. They have slowly changed their tactics to appease fellow opposition groups and the Syrian population.”

Read the full story: From IT to rebel commander: The story of Ayachi Abdel Rahman

But Abdel Rahman said the two groups have had their disagreements over the killing of prisoners. He recalled a joint mission against a government checkpoint in Idlib where al-Nusra members captured and slit the throats of five government soldiers, throwing their bodies on the roadside. They told Abdel Rahman they wanted to instill fear in their enemy.

While the majority of opposition groups, by policy, send captives to face the centralized Free Syrian Army tribunal, YouTube videos show al-Nusra carrying out executions by gunfire and beheading.

Al-Nusra recently signed agreements in most areas, including Jabal al-Zawiya, to abide by the decisions of the Free Syrian Army courts, including the trial of prisoners of war. But al-Haj said there are situations were prisoners are executed without trial.

“There are some who we are sure have killed many,” he said. “By Islamic law it is an eye for an eye. These executions are by the same law as the courts. The intention of Jabhat al-Nursa is not to kill, but to uphold the law.”

Al-Haj said he was surprised when the United States designated al-Nusra a terrorist organization.

Entering the room to serve a lunchtime feast, Al-Haj’s mother-in-law joined the conversation.

When his wife and young son entered the room, al-Haj beamed a joyous smile. He hugged the boy, who ran giggling into his arms, before warmly inviting his guests to enjoy the meal.

Following the terrorist designation in December, protests broke out across Syria in support of al-Nusra. Signs declared, “We are all Jabhat al-Nusra” and “There is no terrorism in Syria except that of Assad.”