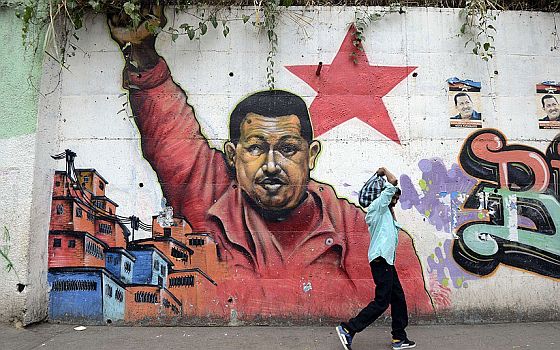 In the Toronto Star, Tony Burman writes: When Chavez was elected in 1998, his government replaced decades of corrupt and greedy rule by political and business elites — openly supported by the United States — who squandered the nation’s wealth.

During his years as president, millions of Venezuelans received health care for the first time. Extreme poverty was reduced by 70 per cent and access to public education increased dramatically. Illiteracy has virtually been eradicated. Above all, the vast Venezuelan majority, marginalized and ignored by governments in past decades, assumed a dignity and pride of place that had been unheard of in the modern Latin American political culture.

Since September 2001, the United States has virtually ignored the region, and the Latin American response has been eye-opening. The populist approach by Chavez, which challenged conventional political and economic thinking, has been contagious.

This is the one region that did not respond to the 2008 global recession with across-the-board austerity. Instead, several governments expanded public services, reduced poverty and inequality, and nationalized key industries. The result has been strong economies and a string of popular governments that have actually been reelected.

Apart from Chavez, who won last October’s presidential election in Venezuela with an 11 per cent margin, the latest example of this is Rafael Correa, reelected last month as Ecuador’s president with 57 per cent of the vote. Last year, Latin America’s first indigenous president, Evo Morales, was elected in Bolivia and, in 2009, Dilma Rousseff was voted in as president of Brazil.

The distinction of Latin America in today’s global political context is that it is far more independent of the United States than other regions, such as Europe or — dare I say — Canada. And that is a staggering irony given its history in the past century of being a virtual vassal, or doormat, of the U.S. [Continue reading…]