Global Mail reports: Tucked away in the sandstone ridges of the rugged tropics near Australia’s north-eastern tip, the ochre “bullymen” with their big penises and staring eyes still cling to the rock.

These are secret paintings, made by Aboriginal men who were driven from their lowlands by colonials hungry for gold, and who were then harassed in the hills by the Native Mounted Police, both black troopers and their white officers.

The locals painted the police, or “bullymen”, onto the rock, in the belief that these works would conquer the enemy through sorcery, as Tommy George, a descendant of the “black trackers” now in his 80s (and the last surviving speaker of Agu Alaya, or Taipan Snake language) has explained to archaeologist Noelene Cole.

The Aboriginal fugitives believed that the paintings were a weapon that gave them power over the armed lawmen, George explained.

“It was so deeply embedded in culture that they could use the rock paintings to kill people – that’s how powerful the art was.

“The paintings were there to kill the police.

“It shows the power of that visual culture. They thought it was as strong as guns,” Cole said.

But now these poignant paintings, along with hundreds of other Aboriginal works in this remote Queensland gallery, which United Nations Educational, Scientific and Cultural Organisation (UNESCO) has recognised as one of the great rock-art precincts of the globe, are under a new threat from another power source: mining.

Prospectors have targeted the land beneath and around the art because it is rich in exploitable resources. These paintings are emblematic of the perils befalling rock art throughout Australia, where the resources sector has been booming for more than a decade, fuelled by China’s insatiable energy needs.

This is a recurring Australian story, as mining, industry and urbanisation surge across a landscape which harbours millions of images at more than 100,000 rock-art sites. State and territory heritage laws have proved weak in protecting the works, under governments keen to cash in on the mining bonanza. [Continue reading…] 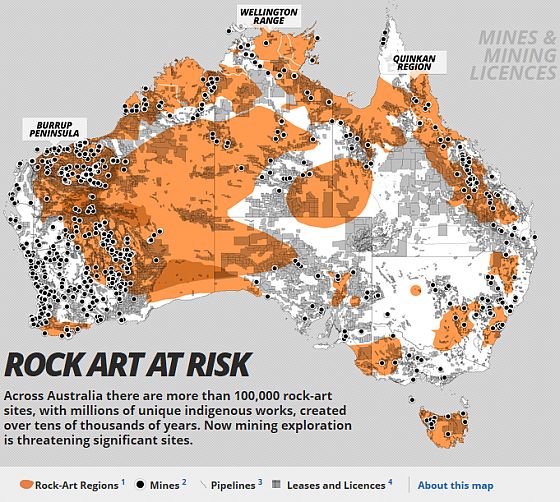