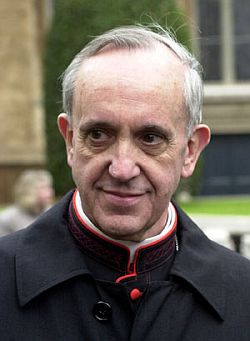 The Guardian reports: Cardinal Jorge Mario Bergoglio, who has become the Catholic church’s 266th pope, is the choice of humility, a Jesuit intellectual who travels by bus and has a practical approach to poverty: when he was appointed a cardinal, Bergoglio persuaded hundreds of Argentinians not to fly to Rome to celebrate with him but instead to give the money they would have spent on plane tickets to the poor.

Something of a surprise choice – he was quoted as a 30/1 outsider going into the conclave – the archbishop of Buenos Aires was one of the leading challengers to Joseph Ratzinger during the 2005 conclave that elected the latter as Benedict XVI.

A champion of liberation theology which some thought might have been too much for conservatives in the Vatican, he nonetheless is considered a candidate that everyone in the higher echelons of the church respects. He becomes the church’s first Latin American pope.

Much is made of his humility: he gave up the grandiose setting of the cardinal’s residence in the Argentine capital for the trappings of a small apartment, and rejected the notion of a chauffeur driven car for public transport.

Bergoglio, who will take the name Francis as pope, was born in December 1936, one of five children of an Italian railway worker. He taught literature and psychology in Argentina before being ordained in 1969. He was created a cardinal by John Paul II on 21 February 2001.

The Associated Press reports: He considers social outreach, rather than doctrinal battles, to be the essential business of the church.

He accused fellow church leaders of hypocrisy and forgetting that Jesus Christ bathed lepers and ate with prostitutes.

Bergoglio’s legacy as cardinal includes his efforts to repair the reputation of a church that lost many followers by failing to openly challenge Argentina’s murderous 1976-83 dictatorship. He also worked to recover the church’s traditional political influence in society, but his outspoken criticism of President Cristina Kirchner couldn’t stop her from imposing socially liberal measures that are anathema to the church, from gay marriage and adoption to free contraceptives for all.

“In our ecclesiastical region there are priests who don’t baptize the children of single mothers because they weren’t conceived in the sanctity of marriage,” Bergoglio told his priests. “These are today’s hypocrites. Those who clericalize the Church. Those who separate the people of God from salvation. And this poor girl who, rather than returning the child to sender, had the courage to carry it into the world, must wander from parish to parish so that it’s baptized!”