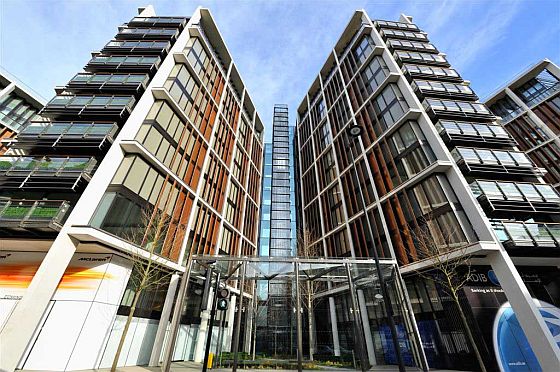 Nicholas Shaxson writes: Up until the 18th century, Knightsbridge, which borders genteel Kensington, was a lawless zone roamed by predatory monks and assorted cutthroats. It didn’t come of age until the Victorian building boom, which left a charming legacy of mostly large and beautiful Victorian houses, with their trademark white or cream paint, black iron railings, high ceilings, and short, elegant stone steps up to the front door.

This will not be the impression a visitor now gets as he emerges from the Knightsbridge subway station’s south exit. He will be met by four hulking joined-up towers of glass, metal, and concrete, sandwiched between the Victorian splendors of the Mandarin Oriental Hotel, to the east, and a pretty five-story residential block, to the west. This is One Hyde Park, which its developers insist is the world’s most exclusive address and the most expensive residential development ever built anywhere on earth. With apartments selling for up to $214 million, the building began to smash world per-square-foot price records when sales opened, in 2007. After quickly shrugging off the global financial crisis the complex has come to embody the central-London real-estate market, where, as high-end property consultant Charles McDowell put it, “prices have gone bonkers.”

From the Hyde Park side, One Hyde Park protrudes aggressively into the skyline like a visiting spaceship, a head above its red-brick and gray-stone Victorian surroundings. Inside, on the ground floor, a large, glassy lobby offers what you’d expect from any luxury intercontinental hotel: gleaming steel statues, thick gray carpets, gray marble, and extravagant chandeliers with radiant sprays of glass. Not that the building’s inhabitants need venture into any of these public spaces: they can drive their Maybachs into a glass-and-steel elevator that takes them down to the basement garage, from which they can zip up to their apartments.

The largest of the original 86 apartments (following some mergers, there are now around 80) are pierced by 213-foot-long mirrored corridors of glass, anodized aluminum, and padded silk. The living spaces feature dark European-oak floors, Wenge furniture, bronze and steel statues, ebony, and plenty more marble. For added privacy, slanted vertical slats on the windows prevent outsiders from peering into the apartments.

In fact, the emphasis everywhere is on secrecy and security, provided by advanced-technology panic rooms, bulletproof glass, and bowler-hatted guards trained by British Special Forces. Inhabitants’ mail is X-rayed before being delivered. [Continue reading…]