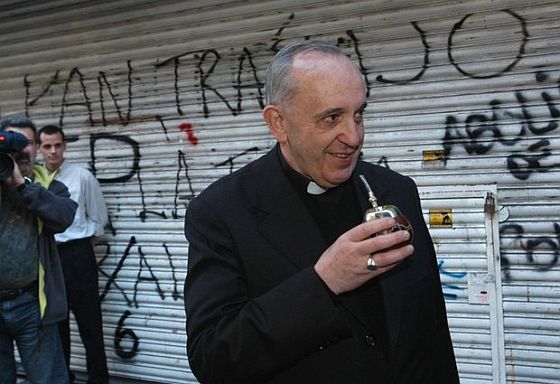 “Journalists sometimes risk becoming ill from coprophilia and thus fomenting coprophagia: which is a sin that taints all men and women, that is, the tendency to focus on the negative rather than the positive aspects,” said Jorge Mario Bergoglio in an interview with Vatican Insider last month, before becoming the new pope.

Maybe the press would become less vulnerable to the charge of peddling in shit if they were better versed in Latin.

To suggest that journalists and the public harbor an unhealthy fascination with dirt is not unreasonable. No doubt many of the things that gain the most media attention would better be ignored, but the problem is less general than simply an excessive focus on the negative. More often, it involves focusing on the negative for the wrong reasons, resulting in excessive attention on trivia while overlooking matters of enduring significance.

Look, for instance, at the ‘evolution’ of Huffington Post which began its life as a reasonably decent mainstream progressive outlet and gradually turned into a kind of liberal National Inquirer. On a descending spiral in search of more traffic, journalism enslaves itself to whatever will capture readers’ interest, and in the process it further corrupts both itself and its audience.

Too rarely do editors pause to ask simple qualitative questions — is this a story about something that matters? — because their overriding concern is quantitative: it’s about counting eyeballs and dollars.

This reductive approach to news not only means that the world gets presented through a distorted lens, but also that stories get broken into easy-to-consume news nuggets. Thus the story of the election of a new pope becomes:

Adding a small layer of nuance, a number of quotations get tossed into the mix. For me, one stands out: “Human rights are not only violated by terrorism, repression or assassination, but also by unfair economic structures that creates huge inequalities.”

Just imagine if an American president said that! Those would be revolutionary words.

But beyond the quotes, the biographical details, the questions about possible collusion with Argentinian dictators, the quality that appears to distinguish the new pope above all others is humility.

This has been widely noted and is indeed noteworthy for many reasons. First of course is the juxtaposition of a humble character with an institutional position of unparalleled grandiosity. Will the Buenos Aires priest bring humility to the institution or will the institution corrupt the man?

Cynics will have already concluded that Pope Francis’s humble facade is just that — a cunning means for gaining power. Call me naive, but I prefer to take what I see at face value and regard these manifestations of humility as genuine — unless or until there is evidence that proves otherwise.

Yet as an atheist, why should I even have any interest in the qualities of the new pope? Isn’t he just another proponent of an unscientific view of the world that the world would be better without?

Firstly, let’s not tar all the faithful with the same brush. This isn’t a Bible-thumping anti-intellectual. Before receiving a doctorate in theology, Bergoglio gained a masters degree in chemistry and taught literature and psychology at the University of El Salvador, in Buenos Aires. While being doctrinally conservative, he is a strong advocate of social justice and appears to live in accordance with the values that he preaches.

And here’s the point: however Pope Francis might be characterized in sound-byte journalism, the degree of influence he exerts across the Catholic world will in large measure be determined by his character.

People of all faiths and no faith are inclined to form views about others — whether in direct relationships or by seeing them on TV — based as much if not more on the manner through which individuals express themselves. Viscerally we respond to bearing, facial expressions and a constellation of largely non-verbal impressions out of which we construct our sense of the person.

If the first impression of this pope — that he is a genuinely humble man — turns out to be an enduring image, then this may also be the most significant feature of his character.

But what is humility?

American culture, with its emphasis on personal freedom, individuality, self-expression, and self-made success, accords little value to a virtue associated with meekness and a lack of assertiveness. It might be called a virtue but to many American eyes humility also looks like weakness. Americans are proud to be proud — rarely esteemed for their humility.

Maybe humility could be called an un-American virtue since it eschews the exceptional; it puts others first; it connects to the earth by being rooted in common ground.

One doesn’t have to share their beliefs or endorse the power of the papacy, to nevertheless recognize that popes, no less than American presidents, have an enduring impact on the world. A pope who is a genuine expression of humility and who exerts a significant influence on the lives of about 20% of the people on this planet, has great potential as a force for good.

2 thoughts on “Why the character of the new pope matters”