William Blake, Elmira Correctional Facility, New York State: “You deserve an eternity in hell,” Onondaga County Supreme Court judge Kevin Mulroy told me from his bench as I stood before him for sentencing on July 10, 1987. Apparently he had the idea that God was not the only one justified to make such judgment calls. 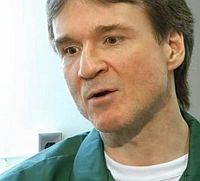 Judge Mulroy wanted to “pump six buck’s worth of electricity into [my] body,” he also said, though I suggest that it wouldn’t have taken six cent’s worth to get me good and dead. He must have wanted to reduce me and The Chair to a pile of ashes. My “friend” Governor Mario Cuomo wouldn’t allow him to do that, though, the judge went on, bemoaning New York State’s lack of a death statute due to the then-Governor’s repeated vetoes of death penalty bills that had been approved by the state legislature. Governor Cuomo’s publicly expressed dudgeon over being called a friend of mine by Judge Mulroy was understandable, given the crimes that I had just been convicted of committing. I didn’t care much for him either, truth be told. He built too many new prisons in my opinion, and cut academic and vocational programs in the prisons already standing.

I know that Judge Mulroy was not nearly alone in wanting to see me executed for the crime I committed when I shot two Onondaga County sheriff’s deputies inside the Town of Dewitt courtroom during a failed escape attempt, killing one and critically wounding the other. There were many people in the Syracuse area who shared his sentiments, to be sure. I read the hateful letters to the editor printed in the local newspapers; I could even feel the anger of the people when I’d go to court, so palpable was it. Even by the standards of my own belief system, such as it was back then, I deserved to die for what I had done. I took the life of a man without just cause, committing an act so monumentally wrong that I could not have argued that it was unfair had I been required to pay with my own life.

What nobody knew or suspected back then, not even I, on that very day I would begin suffering a punishment that I am convinced beyond all doubt is far worse than any death sentence could possibly have been. On July 10, 2012, I finished my 25th consecutive year in solitary confinement, where at the time of this writing I remain. Though it is true that I’ve never died and so don’t know exactly what the experience would entail, for the life of me I cannot fathom how dying any death could be harder or more terrible than living through all that I have been forced to endure for the last quarter-century. [Continue reading…]

1 thought on “A sentence worse than death”