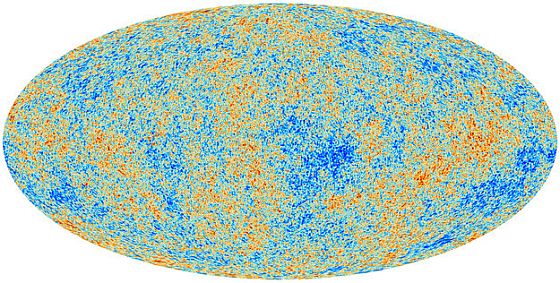 So what’s going on?

The European Space Agency’s Planck mission is what’s going on. Planck has been scanning the entire sky, over and over, peering at the radio and microwaves pouring out of the Universe. Some of this light comes from stars, some from cold clumps of dust, some from exploding stars and galaxies. But a portion of it comes from farther away… much farther away. Billions of light years, in fact, all the way from the edge of the observable Universe.

This light was first emitted when the Universe was very young, about 380,000 years old. It was blindingly bright, but in its eons-long travel to us has dimmed and reddened. Fighting the expansion of the Universe itself, the light has had its wavelength stretched out until it gets to us in the form of microwaves. Planck gathered that light for over 15 months, using instruments far more sensitive than ever before.

The light from the early Universe shows it’s not smooth. If you crank the contrast way up you see slightly brighter and slightly dimmer spots. These correspond to changes in temperature of the Universe on a scale of 1 part in 100,000. That’s incredibly small, but has profound implications. We think those fluctuations were imprinted on the Universe when it was only a trillionth of a trillionth of a second old, and they grew with the Universe as it expanded. They were also the seeds of the galaxies and the clusters and galaxies we see today.

What started out as quantum fluctuations when the Universe was smaller than a proton have now grown to be the largest structures in the cosmos, hundreds of millions of light years across. Let that settle in your brain a moment. [Continue reading…]