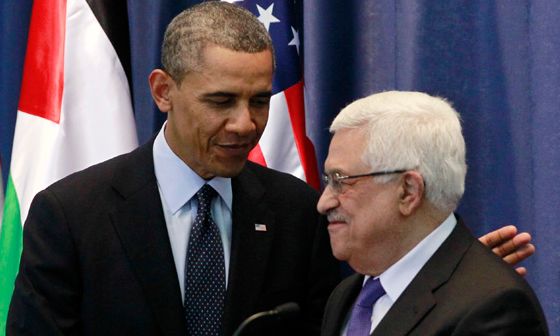 President Obama in Ramallah giving Mahmoud Abbas a pat on the back.

Nadia Hijab writes: The dust is settling after US President Barack Obama’s visit to Israel, the occupied Palestinian territory and Jordan, and it is now easier to see the extent of the debris he has left behind. It is perhaps at the geopolitical level that Obama has done the most damage – and that to the weakest party, the Palestinian authority, he met. The surprise reconciliation he engineered between Israel and Turkey has reversed the only regional realignment in the Palestinians’ favour for years.

Turkish Prime Minister Recep Tayyip Erdogan clearly hopes to soften the blow of restoring normal relations with Israel, badly damaged after Israel’s lethal attack on the Mavi Marmara, by promising a solidarity visit to Gaza. Erdogan is also claiming, in the face of repeated Israeli denials, that he has secured an end to the siege of Gaza.

However, the fact remains that Turkey, Israel and the US have all made concrete political and economic gains while Palestinians gained some empty gestures. [Continue reading…]

2 thoughts on “Once again, Abbas settles for nothing”