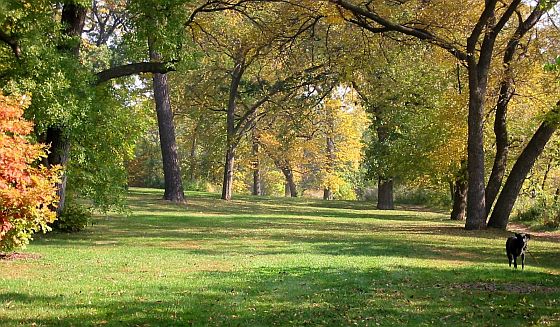 “Systematic differences in EEG recordings were found between three urban areas in line with restoration theory. This has implications for promoting urban green space as a mood-enhancing environment for walking or for other forms of physical or reflective activity.”

In other words, getting away from a frenetic office and city traffic and taking a walk in a peaceful leafy park is good for you.

The idea that visiting green spaces like parks or tree-filled plazas lessens stress and improves concentration is not new. Researchers have long theorized that green spaces are calming, requiring less of our so-called directed mental attention than busy, urban streets do. Instead, natural settings invoke “soft fascination,” a beguiling term for quiet contemplation, during which directed attention is barely called upon and the brain can reset those overstretched resources and reduce mental fatigue.

But this theory, while agreeable, has been difficult to put to the test. Previous studies have found that people who live near trees and parks have lower levels of cortisol, a stress hormone, in their saliva than those who live primarily amid concrete, and that children with attention deficits tend to concentrate and perform better on cognitive tests after walking through parks or arboretums. More directly, scientists have brought volunteers into a lab, attached electrodes to their heads and shown them photographs of natural or urban scenes, and found that the brain wave readouts show that the volunteers are more calm and meditative when they view the natural scenes.

But it had not been possible to study the brains of people while they were actually outside, moving through the city and the parks. Or it wasn’t, until the recent development of a lightweight, portable version of the electroencephalogram, a technology that studies brain wave patterns.

For the new study, published this month in The British Journal of Sports Medicine, researchers at Heriot-Watt University in Edinburgh and the University of Edinburgh attached these new, portable EEGs to the scalps of 12 healthy young adults. The electrodes, hidden unobtrusively beneath an ordinary looking fabric cap, sent brain wave readings wirelessly to a laptop carried in a backpack by each volunteer.

The researchers, who had been studying the cognitive impacts of green spaces for some time, then sent each volunteer out on a short walk of about a mile and half that wound through three different sections of Edinburgh.

The first half mile or so took walkers through an older, historic shopping district, with fine, old buildings and plenty of pedestrians on the sidewalk, but only light vehicle traffic.

The walkers then moved onto a path that led through a park-like setting for another half mile.

Finally, they ended their walk strolling through a busy, commercial district, with heavy automobile traffic and concrete buildings.

The walkers had been told to move at their own speed, not to rush or dawdle. Most finished the walk in about 25 minutes.

Throughout that time, the portable EEGs on their heads continued to feed information about brain wave patterns to the laptops they carried.

Afterward, the researchers compared the read-outs, looking for wave patterns that they felt were related to measures of frustration, directed attention (which they called “engagement”), mental arousal and meditativeness or calm.

What they found confirmed the idea that green spaces lessen brain fatigue.

Research of this kind is not worthless. If urban planners are able to win approval for the construction of more parks because they can use findings like these in order to argue that parks have economic and health value to the populations they serve, all well and good.

But we don’t need electronic data or studies published in peer-reviewed scientific journals in order to recognize the value of parks. Least of all should we imagine that in the absence of such information we cannot have confidence in making judgements about such matters.

A pernicious effect of studies of the kind described above is that they can lead people to believe that unless one can find scientific evidence to support conclusions about what possesses value in this world, then perceptions, intuitions and convictions will offer no real guidance. They belong to the domain of subjectivity and the contents of the human mind — an arena into which science cannot venture.

Frederick Law Olmsted (1822-1903), the father of American landscape architecture, didn’t have access to portable EEGs and for that and other reasons might not have been able to establish scientifically that the parks he designed were good for people. Yet the value they provided didn’t need to be proved through data. The simple testimony of the parks’ visitors was proof enough. Moreover, the principles of design he employed could not be reduced to quantifiable formulae yet they were teachable as an art.

1) Respect “the genius of a place.”
Olmsted wanted his designs to stay true to the character of their natural surroundings. He referred to “the genius of a place,” a belief that every site has ecologically and spiritually unique qualities. The goal was to “access this genius” and let it infuse all design decisions.

This meant taking advantage of unique characteristics of a site while also acknowledging disadvantages. For example, he was willing to abandon the rainfall-requiring scenery he loved most for landscapes more appropriate to climates he worked in. That meant a separate landscape style for the South while in the dryer, western parts of the country he used a water-conserving style (seen most visibly on the campus of Stanford University, design shown at right).

2) Subordinate details to the whole.
Olmsted felt that what separated his work from a gardener was “the elegance of design,” (i.e. one should subordinate all elements to the overall design and the effect it is intended to achieve). There was no room for details that were to be viewed as individual elements. He warned against thinking “of trees, of turf, water, rocks, bridges, as things of beauty in themselves.” In his work, they were threads in a larger fabric. That’s why he avoided decorative plantings and structures in favor of a landscapes that appeared organic and true.

3) The art is to conceal art.
Olmsted believed the goal wasn’t to make viewers see his work. It was to make them unaware of it. To him, the art was to conceal art. And the way to do this was to remove distractions and demands on the conscious mind. Viewers weren’t supposed to examine or analyze parts of the scene. They were supposed to be unaware of everything that was working.

He tried to recreate the beauty he saw in the Isle of Wight during his first trip to England in 1850: “Gradually and silently the charm comes over us; we know not exactly where or how.” Olmsted’s works appear so natural that one critic wrote, “One thinks of them as something not put there by artifice but merely preserved by happenstance.”

4) Aim for the unconscious.
Related to the previous point, Olmsted was a fan of Horace Bushnell’s writings about “unconscious influence” in people. (Bushnell believed real character wasn’t communicated verbally but instead at a level below that of consciousness.) Olmsted applied this idea to his scenery. He wanted his parks to create an unconscious process that produced relaxation. So he constantly removed distractions and demands on the conscious mind. [Continue reading…]