The scene above, which comes from Steven Spielberg’s Munich, depicts the murder of Wael Zuaiter, a Palestinian intellectual and representative of Fatah who was not known to have any connections to terrorism. He was shot in Rome by Israeli secret service agents on October 16, 1972, in revenge for the killing of 11 Israeli athletes and coaches by Palestinian members of Black September during the Olympic Games six weeks earlier.

Spielberg goes to some length to humanize Zuaiter’s murder. The Mossad agents are portrayed as experiencing ambivalence about killing an unarmed man in cold blood. They pause before shooting him several times in the chest.

But the evidence suggests the killing was much more clinical, including a shot to the head. 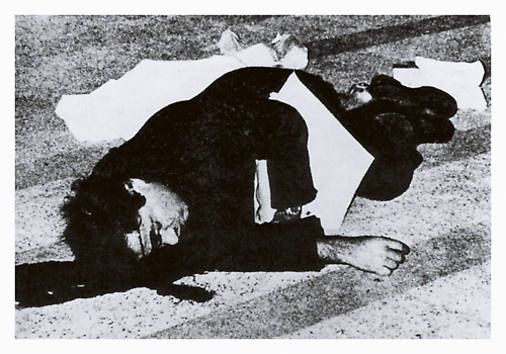 Thus began Operation Wrath of God whose goal was not only to avenge the deaths of Israel’s athletes but to terrorize Palestinian militants. The campaign continued for twenty years involving shootings and bombings, killing intended targets and some mistaken, along with innocent bystanders, as Mossad fought terrorism with terrorism.

The problem with sanctioning a policy of assassination is that assassins are murderers and governments that authorize murder are flirting with tyranny. Democracy can’t be sustained if those in power believe they can suspend the rule of law whenever it seems convenient.

When President Obama authorizes a drone strike in Pakistan, Yemen, or anywhere else, he is ordering members of the CIA to engage in murder. The targets might not be as transparently unthreatening as was Wael Zuaiter and the method of killing might be so obviously murder as is a bullet to the head at point-blank range. Indeed, this is what makes drone warfare a salable policy: the fact that rather than having the appearance of cold-blooded killing, it looks like military operations carried out on the battlefield — even though these attacks are taking place in locations where the United States is not at war. There are no bullet-ridden bodies, no autopsies, no police investigations, no agents on the run or in prison, and no trials.

And even now, when the use of drones is being widely questioned and a New York Times reporter can write in a matter of way that for this administration “killing is more convenient than capture,” there is little prospect that Obama’s authorization of murder will face legal scrutiny. Instead, the CIA is in the process of quietly handing over to the Pentagon responsibility for drone operations.

Questions about whether Obama’s kill list and the deaths of more than 3,000 people involve any kind of criminality will never be addressed and America can retain its sense of innocence with the soothing thought that whatever was done, was done in order to save precious American lives.

1 thought on “How Obama justifies murder”