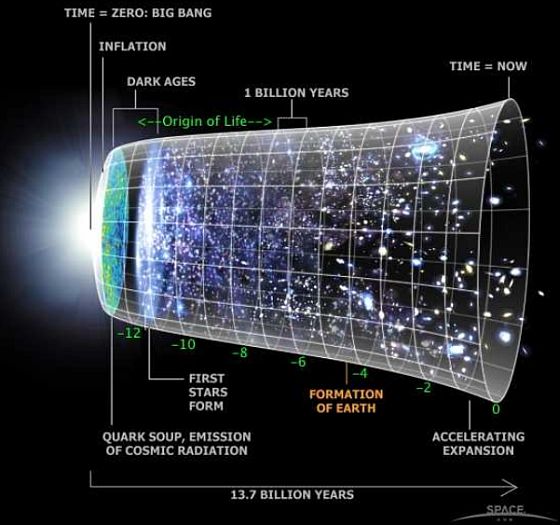 Panspermia — the hypothesis that life exists throughout the universe — has been kicking around among astrophysicists for decades, one of its most recent and prominent proponents being Stephen Hawking.

A couple of geneticists, Alexei Sharov of the National Institute on Aging in Baltimore, and Richard Gordon of the Gulf Specimen Marine Laboratory in Florida, have now proposed that the rate at which evolution advances necessitates that life must be much older than the Earth and may trace back to within the first 2 billion years of the universe’s existence.

They argue that life grows in complexity at a rate that parallels Moore’s Law.

Moore’s Law is the observation that computers increase exponentially in complexity, at a rate of about double the transistors per integrated circuit every very two years. If you apply Moore’s Law to just the last few years’ rate of computational complexity and work backward, you’ll get back to the 1960s, when the first microchip was, indeed, invented.

Sharov and Gordon argue that similar exponential growth applies to genetic complexity with a doubling in complexity every 376 million years. Following this cycle back through the course of evolution would trace life’s origin to about 9 billion years ago. The Earth is only 4.5 billion years old.

This cosmic time scale for the evolution of life has important consequences: (1) life took a long time (ca. 5 billion years) to reach the complexity of bacteria; (2) the environments in which life originated and evolved to the prokaryote stage may have been quite different from those envisaged on Earth; (3) there was no intelligent life in our universe prior to the origin of Earth, thus Earth could not have been deliberately seeded with life by intelligent aliens; (4) Earth was seeded by panspermia; (5) experimental replication of the origin of life from scratch may have to emulate many cumulative rare events; and (6) the Drake equation for guesstimating the number of civilizations in the universe is likely wrong, as intelligent life has just begun appearing in our universe.

Much as the following observation might offend the likes of Richard Dawkins and his ilk, it’s hard not to see in this new view of the origin of life some echoes of ancient religious assertions about the uniqueness of human beings and about the intimate connection between life and existence.

The image here is of a universe seeded with life which then coalesces in a crescendo of complexity on Earth, leading to the appearance of humanity as in some sense a fulfillment of the universe’s reason for existence. Small wonder that as the fruit of such a ‘design’, humans would become fascinated by ideas about divine causality.

At the same time, if we really are this isolated beacon of intelligence, then so much greater is the irony about how we choose to live.

After 9 or even 12 billion years of evolution spanning the universe, we arrive at this: Gangnam Style, Justin Bieber, and Generation Text? Climate change, mass extinction of species, and destruction of the ethnosphere? Is this a cosmic plan or a cosmic joke?

3 thoughts on “Life before Earth”