Robert Krulwich writes: Look at the center of this map, at the little red dot that marks Kansas City. Technically, Kansas City is at the edge of Missouri, but here on this map it’s in the upper middle section of a bigger space with strong blue borders. We don’t have a name for this bigger space yet, but soon we will. 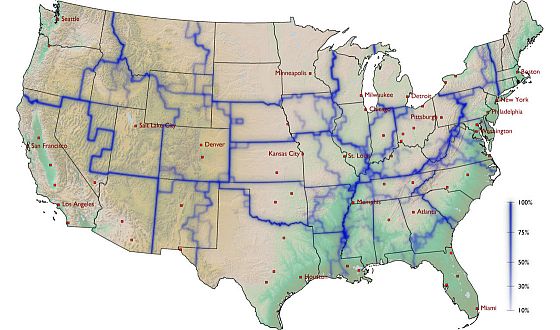 I would call it, for the moment, “The Part Of America Kansas City Hangs With” because that’s what this map is saying. It’s a new, intriguing way to see our country. This one was built by tracking dollar bill circulation. There’ve been similar maps built from phone call data. The idea here is to show America not as 50 states, but as regions where people do stuff together. In other words, a “Whom Do You Hang With?” map.

Here’s the notion. A few years ago, Dirk Brockmann, a theoretical physicist from Germany, was visiting his American friend Dennis, and they got talking about population mobility. Dirk knew Americans move around a lot, but he wondered how to capture where they go, who they talk to. His friend said, “Have you ever heard of Where’s George? Dirk hadn’t.

It’s a website that tracks the movement of dollar bills. Thousands of people participate. All you do is take a bill out of your wallet, type the denomination, serial number, the date and your zip code onto the Where’s George? site, and then, with a pen or a stamp, deface the bill with the words “WheresGeorge.com.” After which (and this is key), you spend it. So now your bill is moving from business to business, person to person, and if and when another Where’s George volunteer discovers it, she or he will note where, note when and spend it again. Since dollar bills pass between people, Dennis suggested why not us the “Where’s George?” data to get a sense of where people go, and, just as interesting, where they don’t go?