Geoffrey Wheatcroft writes: Over the last months before his much-lamented death in August 2010, Tony Judt talked at length with Timothy Snyder, his friend and fellow historian. Their conversations, published after Judt died as Thinking the Twentieth Century, were about “the politics of ideas,” the subject of the book on which Judt had embarked after Postwar, his splendid history of Europe since V-E Day, but which he knew he would not live to write. Some of these political ideas had affected him personally, in particular Zionism. As a schoolboy in London and a Cambridge undergraduate, Judt had been not only a committed supporter but also an energetic activist in Dror, a small socialist-Zionist group. He spent summers working on a kibbutz and in 1967 flew to Israel in the hour of peril as the Six-Day War began.

The story of Judt’s disenchantment with Israel and Zionism is well known, culminating in a 2003 essay in the New York Review of Books in which he concluded that Zionism, as a version of late nineteenth-century nationalism, had itself become anachronistic in a twenty-first century of open borders and multiple identities. In Thinking the Twentieth Century, Judt talks again at some length about these questions, and there is one particularly arresting passage. Despite his own early indoctrination in the socialist variant of Zionism, “I came over time to appreciate the rigor and clear-headed realism of Jabotinsky’s criticisms.” 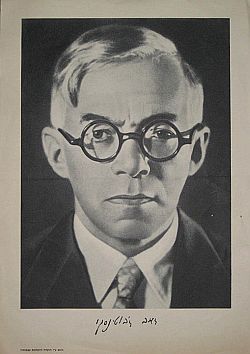 Today there are perhaps not many readers of the New York Times or the Washington Post, let alone most other Americans, even if they warmly support Israel, who could identify Vladimir Jabotinsky by name. “Jabo” died in 1940 at a training camp near New York City and might seem a remote historical figure. And yet, as a South African historian once wrote, although his pages told of distant events, “they are also about today.” While such essays as Akiva Eldar’s fascinating “Israel’s New Politics and the Fate of Palestine” in this magazine give much insight into the here and now, that in itself cannot be understood without the there and then. What Jabotinsky once said and did is acutely relevant now, ninety years after he founded his “Revisionist” New Zionist Organization.

He may have died long ago, but his soul went marching on. In 1946–1948, the Irgun, the Revisionist armed force — “terrorists” to the British and the New York Times at the time — practiced violence against British and Arabs. It was led by Menachem Begin, who in 1977 would become the first Israeli prime minister from the Right, ending almost three decades of Labor hegemony. Two more recent leading Israeli politicians, Ehud Olmert and Tzipi Livni, a former prime minister and a one-time foreign minister, respectively, are children of Irgun activists. Jabo’s portrait hangs at Likud party meetings, and Benjamin Netanyahu, the present Likud leader and prime minister, has a direct personal connection with him. As for the Jewish Americans who continue to support the Jewish state, they may never have read a word of him, but they might be troubled if they did. Jabo is very much about today. [Continue reading…]