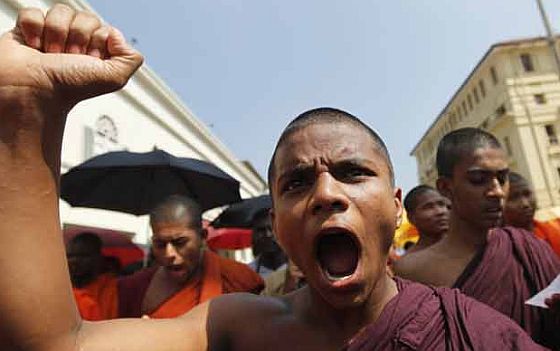 Cynical as it might sound, religious teachings are marketing tools — indeed, there is nothing in commerce that makes claims as grandiose as those made by any religion. The success of religious marketing is always evident when something happens that seems to expose a glaring gap between a religion and the behavior of some of its adherents.

Since Buddhism with its humanistic values and lack of doctrinal baggage has wide appeal in this secular age, it seems particularly jarring when Buddhists — and not just the laity but worst of all those donning the colors — are out on the streets beating up their opponents.

Aren’t Buddhists, as the Dalai Lama advises, meant to regard their adversaries as teachers — not enemies to be crushed?

That is of course what the Middle Way teaches, but just like every other religion, Buddhism has throughout the ages progressed as a social force by aligning itself to power. Moreover, through institutionalizing the lifestyle of the sannyasin — the renunciate who gives up home and possessions and wanders alone relying on the charity of others — Buddhist monasticism never adopted the values of self-reliance which gave other monastic systems a higher degree of autonomy and thus a measure of economic and cultural insulation from forces in society at large.

Buddhist monks cannot so easily rise above the political passions of the people who feed them.

Alan Strathern writes:[H]istorically, Buddhism has been no more a religion of peace than Christianity.

One of the most famous kings in Sri Lankan history is Dutugamanu, whose unification of the island in the 2nd Century BC is related in an important chronicle, the Mahavamsa.

It says that he placed a Buddhist relic in his spear and took 500 monks with him along to war against a non-Buddhist king.

He destroyed his opponents. After the bloodshed, some enlightened ones consoled him: “The slain were like animals; you will make the Buddha’s faith shine.”

Burmese rulers, known as “kings of righteousness”, justified wars in the name of what they called true Buddhist doctrine.

In Japan, many samurai were devotees of Zen Buddhism and various arguments sustained them – killing a man about to commit a dreadful crime was an act of compassion, for example. Such reasoning surfaced again when Japan mobilised for World War II.

Buddhism took a leading role in the nationalist movements that emerged as Burma and Sri Lanka sought to throw off the yoke of the British Empire. Occasionally this spilled out into violence. In 1930s Rangoon, amid resorts to direct action, monks knifed four Europeans.

More importantly, many came to feel Buddhism was integral to their national identity – and the position of minorities in these newly independent nations was an uncomfortable one. [Continue reading…]

1 thought on “Why are Buddhist monks attacking Muslims?”