Jacob Mikanowski writes: Canudos, the holy city. From the hills it had looked like a mirage. Fifty-two hundred mud huts and a handful of white-washed churches spread along a bend in the Vasa-Barris, where a few years before there had been only a ruined farmhouse and an old well. The walls of the houses were the same shade as the parched earth on which they stood, so you could barely see the town until you were already in it. For the last ten months of the city’s life, it been bombarded by a full division of the Brazilian Army. Thousands of its defenders — the half-cowboy, half-bandit jagunços — were dead. They had been shelled by artillery from the mountains and gunned down by machine guns on the plains. When the fighting moved into the city itself, they fought house to house and door to door, using piles of corpses as barricades. Their leader was dead. Dysentery claimed him in the night. Hundreds had died in the weeks since. The end was at hand. On October 5, 1897 the Army made its final assault on the town. They found four combatants left in the trenches: two adults, an old man, and a child. They died where they stood. Canudos was no more.

Euclides da Cunha, an engineer and journalist embedded with the troops, nicknamed Canudos the “mud-walled Jerusalem,” but to the people who lived there, it was Belo Monte, the beautiful hill. When the soldiers of the Brazilian Republic finally took the city, they burnt every house, one by one, and pulled down all the spires. Then they cut the throats of all the male prisoners, including the children, and sold the women and girls to the brothels on the coast.

Finally, they dug up the body of Antonio Conselheiro, Antonio the Counselor, maybe to make sure the Messiah of the Brazilian backlands was dead. They cut off his head and sent it to Salvador, where it was met by a jubilant crowd. Doctors studied the skull for abnormalities, after which it was placed in a museum. 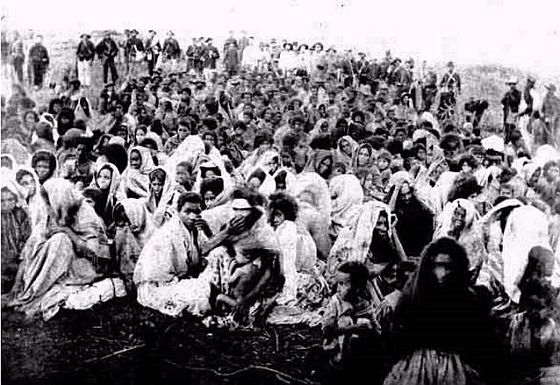 The photograph above shows prisoners from Canudos. It might be the first photograph of refugees, ever. It was taken just before the end of the siege by Flavio de Barros, a journalist embedded with the Brazilian Army. Barros’ equipment wasn’t very good. His pictures are scratched, damaged, and blown out by the force of the tropical sun. In this photo, the blurriness comes from the slow exposure time. Inadvertently, he caught the adults’ restlessness, the fidgeting of the children. We can’t know for sure if they are aware of what’s coming, but it’s a safe bet that they’re afraid.

The apocalypse they had been promised was different. It was supposed to be an end to poverty, an end to hunger, an end to drought, an end to property and rank. They were going to inherit the earth. For a time, it had even felt as if they had.

Canudos came into being because of a dream. It was a dream of utopia and a dream of escape. It was an ancient dream: the earthly Jerusalem, the heavenly city. And in the 1890s, it was shared by the dispossessed and marginalized the world over: by the inhabitants of Canudos in the drought-raved backlands of Brazil, by the anti-foreign Boxers in northern China, by the half-ecstatic, half-despairing practitioners of the Ghost Dance in the American West. All of them, in their separate ways, were searching for space and the means to remake the world over in their image. [Continue reading…]