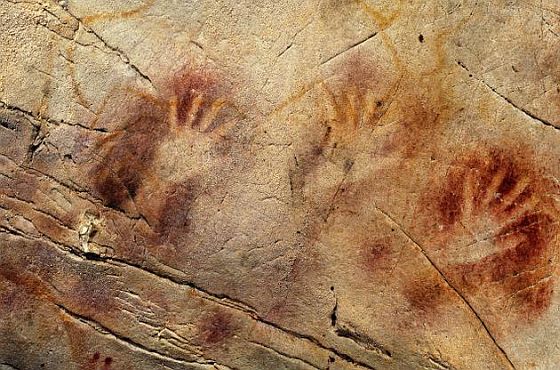 Red disks next to stenciled hand-prints in El Castillo cave, Spain -- one at least 40,800 years old -- might be the creation of Neanderthals.

Tim Appenzeller writes: [D]id the Neanderthals, once caricatured as brute cavemen, have minds like our own, capable of abstract thinking, symbolism and even art? It is one of the most haunting questions about the people who once shared a continent with us, then mysteriously vanished.

An early date for the paintings [found in El Castillo cave, Spain] would also be a vindication for the slight, dark-haired man watching as Pike works [taking samples of calcite accretions formed on the surface of the paintings]: João Zilhão, who has emerged as the leading advocate for Neanderthals, relentlessly pressing the case that these ice-age Europeans were our cognitive equals. Zilhão, an archaeologist at the Catalan Institution for Research and Advanced Studies at the University of Barcelona in Spain, believes that other signs of sophisticated Neanderthal culture have already proved his point. But he is willing to debate on his opponents’ terms. “To my mind, we don’t need that evidence,” he says of the paintings. “But I guess for many of my colleagues this would be the smoking gun.”

The front line in the Neanderthal wars runs through another cave: Grotte du Renne, 1,000 kilometres away in central France. As early as the 1950s, excavations there unearthed a collection of puzzling artefacts. Among them were bone awls, distinctive stone blades and palaeolithic baubles — the teeth of animals such as foxes or marmots, grooved or pierced so that they could be worn on a string. They were buried beneath artefacts typical of the first modern humans in Europe, suggesting that these objects were older. A startling possibility loomed: that artefacts of this style, collectively known as the Châtelperronian industry, were made by Neanderthals. [Continue reading…]