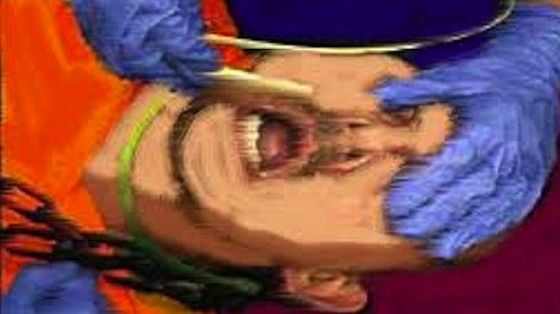 Clyde Haberman, a columnist for the New York Times, seems to have more interest in telling readers what he ate for lunch, than in attempting to imagine or convey what it might be like to be force-fed — even when the ongoing hunger strike at Guantánamo features prominently in his most recent piece.

Maybe he felt like there was some delicious irony in having a conversation about America’s political prisoners — who having been offered no due process are now driven to the ultimate act of desperation — while enjoying a meal at a trendy Italian restaurant in Greenwich Village.

Haberman had invited Karen J. Greenberg, director of the Center on National Security at Fordham University’s law school, for lunch at Morandi.

Ms. Greenberg, who said she was but an occasional visitor to the restaurant, selected the insalata di farro, or spelt salad. Her tablemate had cavatappi alla Norma, a corkscrew-shaped pasta with tomatoes, roasted eggplant and mozzarella. The main event lay ahead, though. “I only eat so that I can have dessert,” said Ms. Greenberg, a slender woman of 57. She chose the torta di ricotta with sliced strawberries, which she happily shared over coffees.

Are these the observations of a journalist who offers a richer view of the world by tossing in seemingly accidental details that add color to his reporting, or someone so steeped in the Times’ genteel culture that he hasn’t a clue when he’s portraying himself as an asshole? (That’s a rhetorical question.)

Turning to the topic at hand — the ability of America’s legal system to meet the challenge from terrorism — we learn:

Ms. Greenberg (who is not a lawyer) sides with President Obama and others who believe that by holding prisoners indefinitely at Guantánamo, this country has, as she put it, “turned its legal premises upside down.” To be practical about it, she notes that 509 terror-related cases have been settled in federal courts since Sept. 11, 2001, with a conviction rate of 89 percent, while military commissions have produced a mere seven convictions.

“Yes, I understand that self-defense is an extremely important issue,” she said. “But self-defense with a measure of wisdom would be a lot better than self-defense that screams fear and a lack of confidence in your ability to keep yourself safe.”

Her vexation extends to fearful politicians, the ones who recoiled at the Obama administration’s original plan to hold a trial in Lower Manhattan — in the shadow of the vanished towers, as it were — for Khalid Shaikh Mohammed, the self-described mastermind of the 9/11 attacks. They ignored how New York has had many terrorism trials, sometimes several at once. Throughout, the city barely blinked.

“We can take in an awful lot,” Ms. Greenberg said. “New Yorkers are tough. They’re savvy. And so are New York juries.”

There is a disquieting question that one always hesitates to ask. But it found its way unavoidably into the discussion: How is it that we have dodged suicide attacks on seemingly soft targets? A New York bus, for instance. Or, say, a supermarket, in another part of the country.

As for striking an out-of-the-way target, “it’s not really Al Qaeda’s message that you’re not safe anywhere,” she said. “Al Qaeda’s message is, ‘The United States needs to be taught a lesson.’ It’s very much focused on New York. Mayor Bloomberg’s right when he says every terrorist has a map of New York City in their pocket. It’s about the spectacle.”

In the counter-terrorism narrative with which Americans have been indoctrinated for over a decade, a massive security apparatus has been constructed which tirelessly thwarts threats, seemingly coming from every direction. The absence of another 9/11 scale attack has led many of America’s leaders to claim or accept credit for qualified success in “keeping America safe.”

Absent their efforts, had there been no war on terrorism, no massive expansion of intelligence agencies, and no hyper-focusing on asymmetric threats, could America have survived? Would its imperial power have suffered a fatal blow? I think not — and I’m reminded of a scene from Woody Allen’s Annie Hall:

Have you ever swerved out of the way as an oncoming driver who seemed intent on causing a suicidal head-on collision? No? Me neither. But it’s the kind of thing that’s very easy to imagine. And that’s what the imagination does: conjures up a million and one possibilities of events that rarely or never happen.

There are all sorts of things that are possible, but which we should never allow to govern our lives. More Americans get killed by lightening than killed by terrorism, yet that risk has not prompted an effort to protect this country with a lightening-proof dome.

So why has the terrorism threat been such an easy sell?

Rarely fatal lightening strikes, much more commonly deadly tornadoes, devastating hurricanes, and occasional earthquakes are all viewed as dangers that Americans will always face. But terrorism is the great other which taps into this nation’s pervasive xenophobia and fosters a sense of America’s inner light by placing darkness on the outside. Terrorism makes Americans feel good as they tell themselves the greatest forces of evil all emanate from elsewhere.

Keep fear on a slow simmer and then we can all be reassured that our money’s being well spent, keeping us safe.

2 thoughts on “Terrorism and imagination”