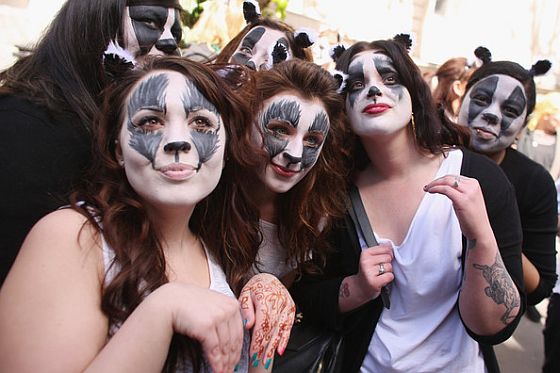 International Business Times reports: A rally by extremists from the British National Party and the English Defence League was dwarfed by opposition campaigners staging rival protests in London on Saturday 1 June.

Shortly after lunch, a die-hard core of around 50 BNP and EDL supporters was confronted outside parliament by hundreds of activists from anti-extremist groups including Unite Against Fascism and Hope Not Hate.

But in the event, both groups were upstaged by agitators of a different stripe. Decked out from head to toe in black and white, the group that won the day were campaigning neither for race war nor ethnic equality, but an end to the government’s cull on badgers.

And it was the pro-badger campaigners who appeared to steal a march on the political activists.

Young women dressed in fake fur were seen chasing doughty nationalist supporters down London’s Whitehall as a large number of security forces in iridescent jackets looked on from police lines.