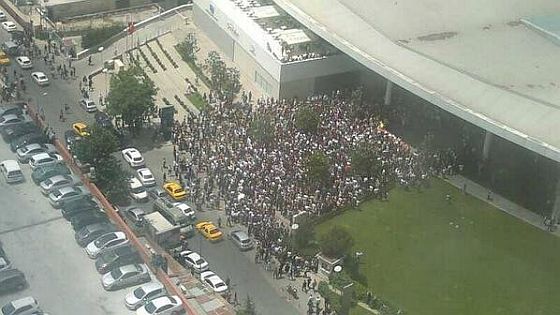 A protest outside Turkey's NTV against their lack of coverage of the #occupygezi protests.

Pablo Barberá and Megan Metzger write: Over the past several years the role of social media in promoting, organizing, and responding to protest and revolution has been a hot topic of conversation. From Occupy Wall Street to the Arab Spring Revolutions, social media has been at the center of many of the largest, most popular demonstrations of political involvement. The protests taking place in Turkey add to this growing trend, and are already beginning to add new layers to our understanding of how social media can contribute to public participation.

Protests have been ongoing since early this week in Istanbul’s Taksim Square. Organized in response to government plans to tear down the green space in the center of the square and replace it with a shopping center, the protests have morphed into a more visceral expression of the general discontent with the government’s policies over the last several years In response, the police fired massive amounts of tear gas and pepper spray into the crowd and set fire to tents set up for protesters to sleep in, leaving several people injured. Protesters have begun wearing homemade gas masks while continuing to protest on the street. As of 2 AM Turkish time on Saturday, the protests are still in progress and some protestors have reportedly breached the barrier and entered the park.

The social media response to and the role of social media in the protests has been phenomenal. Since 4pm local time yesterday, at least 2 million tweets mentioning hashtags related to the protest, such as #direngeziparkı (950,000 tweets), #occupygezi (170,000 tweets) or #geziparki (50,000 tweets) have been sent. As we show in the plot below, the activity on Twitter was constant throughout the day (Friday, May 31). Even after midnight local time last night more than 3,000 tweets about the protest were published every minute. [Continue reading…]

1 thought on “A breakout role for Twitter? Extensive use of social media in the absence of traditional media by Turks in Turkish in Taksim Square protests”