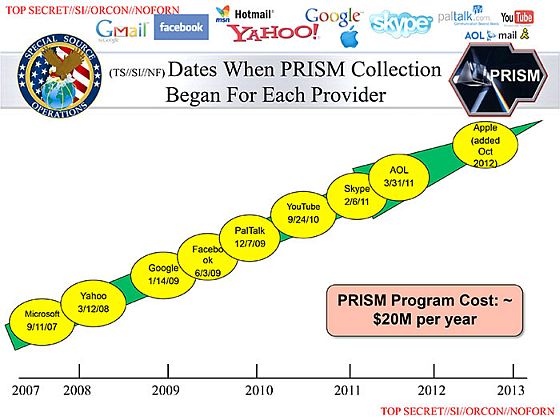 The PRISM Special Source Operations with trusted U.S. companies -- trusted, that is, by the NSA.

The Washington Post reports: The National Security Agency and the FBI are tapping directly into the central servers of nine leading U.S. Internet companies, extracting audio, video, photographs, e-mails, documents and connection logs that enable analysts to track a person’s movements and contacts over time.

The highly classified program, code-named PRISM, has not been disclosed publicly before. Its establishment in 2007 and six years of exponential growth took place beneath the surface of a roiling debate over the boundaries of surveillance and privacy. Even late last year, when critics of the foreign intelligence statute argued for changes, the only members of Congress who knew about PRISM were bound by oaths of office to hold their tongues.

An internal presentation on the Silicon Valley operation, intended for senior analysts in the NSA’s Signals Intelligence Directorate, described the new tool as the most prolific contributor to the President’s Daily Brief, which cited PRISM data in 1,477 articles last year. According to the briefing slides, obtained by The Washington Post, “NSA reporting increasingly relies on PRISM” as its leading source of raw material, accounting for nearly 1 in 7 intelligence reports.

That is a remarkable figure in an agency that measures annual intake in the trillions of communications. It is all the more striking because the NSA, whose lawful mission is foreign intelligence, is reaching deep inside the machinery of American companies that host hundreds of millions of American-held accounts on American soil.

The technology companies, which participate knowingly in PRISM operations, include most of the dominant global players of Silicon Valley. They are listed on a roster that bears their logos in order of entry into the program: “Microsoft, Yahoo, Google, Facebook, PalTalk, AOL, Skype, YouTube, Apple.” PalTalk, although much smaller, has hosted significant traffic during the Arab Spring and in the ongoing Syrian civil war. [Continue reading…]