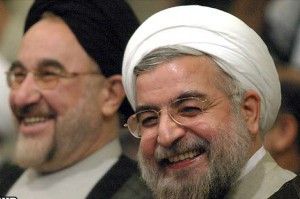 With results from all the precinct in, Rouhani had won 50.7 percent of the votes, avoiding a runoff, Mohammad-Najjar said.

Bloomberg reports: Support for Rohani swelled in the final days of the campaign after former presidents Ali Akbar Rafsanjani and Mohammad Khatami joined forces to endorse him.

Addressing a packed Tehran stadium last week, Rohani, who campaigned on the slogan “prudence and hope,” urged his young supporters to overcome political apathy and their frustration over the lack of jobs and vote for him. Rohani waved a giant key at his rallies as a symbol that he will unlock closed doors.

“Though hardliners remain in control of key aspects of Iran’s political system, the centrists and reformists have proven that even when the cards are stacked against them, they can still prevail due to their support among the population,” Trita Parsi, author of “A Single Roll of the Dice: Obama’s Diplomacy with Iran” and president of the National Iranian-American Council in Washington, wrote in an e-mail.

The departure of Mohammad Reza Aref from the campaign on June 10 meant Rohani had the reformist platform to himself against a field of five conservatives who failed to agree on a unity candidate.

Rohani has spoken in favor of increased freedom for the press and non-governmental organizations. He has also called for the easing of social restrictions, criticizing the government’s “unwarranted interventions” in Iranians’ lives.
Economy ‘Critical’

In April, Rohani promised that his government would pursue “dialogue and interaction with the world.” He also said the economy is in a “critical” situation and that sanctions can’t be blamed for the country’s “weaknesses.”

Still, he said sanctions must be tackled for the economy to take a new direction away from a 30 percent inflation rate and unemployment that left a quarter of Iranians age 15 to 29 without jobs in the year ended March 20.

Earlier this week, Farideh Farhi wrote: The decision by the reformist candidate Mohammadreza Aref to withdraw his candidacy — and in effect open the path for the centrist Hassan Rowhani to become the unified candidate of both the centrists and reformists — is an important development in Iranian politics. Its impact will reach beyond this election.

This isn’t only because the centrist and reformist forces, currently led by former presidents Akbar Hashemi Rafsanjani and Mohammad Khatami, respectively, have done what the conservative forces failed to do. After all, the conservatives — or the array of forces known as the “Principlists” in Iran, also began with the idea of coalition-building in mind. The trio – former foreign minister Ali Akbar Velayati, Tehran mayor Mohmmad Baqer Qalibaf, and former Parliament Speaker Gholamreza Haddad Adel — had agreed that only one of them would stand on Election Day. Today, however, only Haddad Adel has dropped out without specifying his preferred candidate.

Beyond Velayati and Qalibaf, other principlist candidates, including nuclear negotiator Saeed Jalili and former IRGC commander Mohsen Rezaie, remain in the race. So now a splintered principlist field faces a candidate that has the backing of significant political and social forces; a candidate who may, just may, become president if the Iranian electorate decides to vote in larger than expected numbers and, of course, there is no ballot box-tampering.

Just this thought, for me, represents an amazing turn of events in Iran’s ongoing election saga. But even if this form of strategizing does not yield success for whatever reason, the process that led to this alliance is an important one; one that may have a lasting impact on Iranian politics. [Continue reading…]