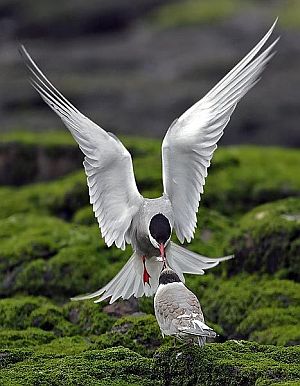 The Washington Post reports: At the Maine Coastal Islands National Wildlife Refuge, the tiny bodies of Arctic tern chicks have piled up. Over the past few years, biologists have counted thousands that starved to death because the herring their parents feed them have vanished.

Puffins are also having trouble feeding their chicks, which weigh less than previous broods. When the parents leave the chicks to fend for themselves, the young birds are failing to find food, and hundreds are washing up dead on the Atlantic coast.

What’s happening to migratory seabirds? Biologists are worried about a twofold problem: Commercial fishing is reducing their food source, and climate change is causing fish to seek colder waters, according to a bulletin released Tuesday by the U.S. Fish and Wildlife Service.

Biologists at the Maine refuge are not sure whether herring sought colder waters elsewhere or went deeper, but they are no longer on the surface, from which Arctic terns pluck them. While other birds can dive deep for food, Arctic terns cannot.

“They’re not getting herring, so they bring butterfish that the chicks can’t swallow,” Welch said. “So they starve to death. You have thousands and thousands of chicks dying. It’s very sad.” [Continue reading…]