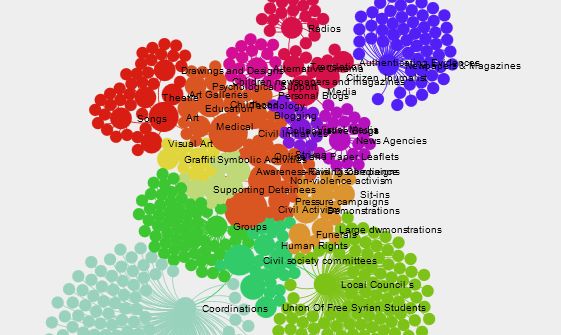 Kristyan Benedict writes: Non violent resistance in Syria? Don’t make me laugh. Those trying to topple Assad are all cannibals and head choppers….or so the likes of the academic “Angry Arab”, Asad Abu Khalil would, it would seem at times, try to convince you.

The reality is Syrians in their tens of thousands continue to resist the Assad regimes brutality (and sometimes resist certain armed opposition groups) through non-violent methods of staggering diversity and creativity. The extremely grim and brutal reality which regime apologists and quite often the mainstream media present is but one, extremely narrow perspective of what is going on in Syria. It is far from the whole truth.

A Syrian activist friend of mine, Omar al Assil, has recently produced a beautiful, interactive map of non-violent resistance in Syria. It was created with his colleagues in the Syrian Non Violence Movement including their members inside Syria.

I mention Abu Khalil as he was the first to respond to the map when the social commentator, Sultan Sooud Al-Qassemi posted it on his Facebook wall on June 21. Abu Khalil responded smugly: “Very convincing. Is there a special color for beheadings?”.

Pulse Media’s Muhammad Idrees Ahmad responded eloquently in the same thread to Abu Khalil’s customary inelegance: “He wants you to make blanket generalisations; to make no distinction between the Syrian majority who oppose the regime peacefully, the minority who defend themselves with arms, or the few who commit unpardonable crimes. They must all be judged by the standard of the lowest among them. Find the most criminal action, and extrapolate it onto the whole opposition.”

That extrapolation is a common reaction by many who only want to amplify the negatives of those opposed to the Assad regime. [Continue reading…]