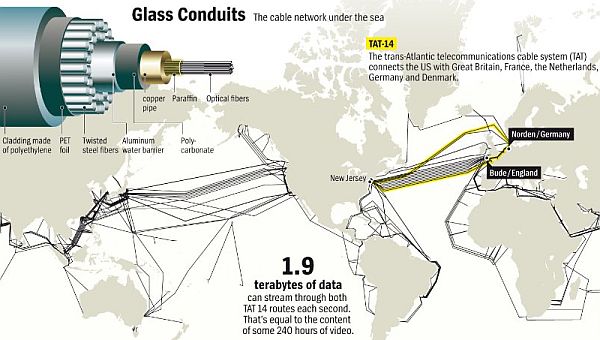 The Associated Press reports: The saga of Edward Snowden and the NSA makes one thing clear: The United States’ central role in developing the Internet and hosting its most powerful players has made it the global leader in the surveillance game.

Other countries, from dictatorships to democracies, are also avid snoopers, tapping into the high-capacity fiber optic cables to intercept Internet traffic, scooping their citizens’ data off domestic servers, and even launching cyberattacks to win access to foreign networks.

But experts in the field say that Silicon Valley has made America a surveillance superpower, allowing its spies access to massive mountains of data being collected by the world’s leading communications, social media, and online storage companies. That’s on top of the United States’ fiber optic infrastructure — responsible for just under a third of the world’s international Internet capacity, according to telecom research firm TeleGeography — which allows it to act as a global postmaster, complete with the ability to peek at a big chunk of the world’s messages in transit.

“The sheer power of the U.S. infrastructure is that quite often data would be routed though the U.S. even if it didn’t make geographical sense,” Joss Wright, a researcher with the Oxford Internet Institute, said in a telephone interview. “The current status quo is a huge benefit to the U.S.” [Continue reading…]