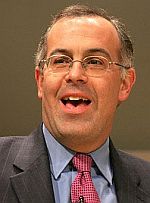 David Brooks is the kind of mild-mannered conservative who was able to move from the Weekly Standard to the New York Times as easily as a hand sliding into a glove.

To describe the largest political class in the Middle East as lacking the equipment to govern, would, from anyone else’s mouth, sound like the crudest form of bigotry. Brooks makes it sound like incontrovertible truth.

Islamists might be determined enough to run effective opposition movements and committed enough to provide street-level social services. But they lack the mental equipment to govern. Once in office, they are always going to centralize power and undermine the democracy that elevated them.

Nathan Brown made that point about the Muslim Brotherhood recently in The New Republic: “The tight-knit organization built for resilience under authoritarianism made for an inward-looking, even paranoid movement when it tried to refashion itself as a governing party.”

It’s no use lamenting Morsi’s bungling because incompetence is built into the intellectual DNA of radical Islam. We’ve seen that in Algeria, Iran, Palestine and Egypt: real-world, practical ineptitude that leads to the implosion of the governing apparatus.

I’m surprised Brooks included a link to Brown’s piece in TNR because anyone who goes there will see that the George Washington University professor doesn’t share Brooks’ contempt for Islamists. Brown writes:

In studying Islamist movements over the last decade, I generally found that the most rewarding time to speak to leaders was about a year or so after an election. During the heat of the political battle, they made decisions like most politicians do (on the fly, often overreacting to yesterday’s headlines) and spoke like most politicians do (providing glib spin than reflective analysis). But at calmer moments, they spoke less like politicians and more openly. And there was a reason why: The movements prided themselves (justifiably) on an ability to learn.

Egypt’s Muslim Brotherhood and its sister organizations represent the most successful non-governmental organizations in Arab history. No other movements have been able to sustain, reinvent, and replicate themselves over so much time and space. And there are two secrets to that success: a tight-knit organizational structure that rewards loyalty and the ability to adjust and adapt.

How high does the Republican Party score on its ability to adjust and adapt? On the basis of its current trajectory as America’s old white party, I’d say: not very well.

Let’s suppose that Egypt’s military swiftly organize new presidential elections and Mohamed ElBaradei becomes the face of secularist rule in Egypt. Will Brooks then give the secularist just one year to see if they possess the mental equipment to govern?

It looks like it won’t be long before the New York Times columnist reverts to the neoconservatives’ default position: Muslims aren’t ready for democracy.