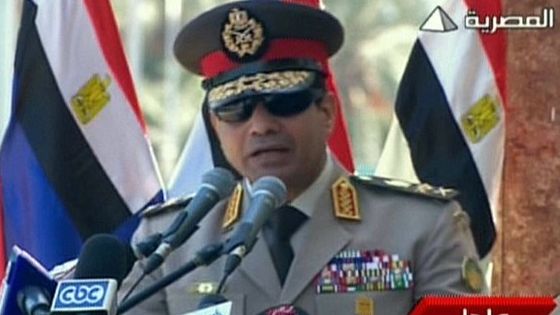 William J. Dobson writes: Gen. Abdel-Fattah el-Sissi certainly knows how to dress the part. On Wednesday, wearing dark sunglasses, full military dress, and a chest full of medals—despite never having seen combat—Egypt’s defense minister looked every bit the junta leader that his critics say he is. “Come out to give me the mandate and order that I confront violence and potential terrorism,” he declared in a nationally broadcast speech, as he called for Egyptians to take to the streets in a show of support for him and the rump government the country’s generals have propped up. “I’ve never asked you for anything. I’m asking you to show the world. If violence is sought, or terrorism is sought, the military and the police are authorized to confront this.” After weeks of violent clashes, Gen. el-Sissi wasn’t interested in tamping down the unrest or demanding a return to calm; he was stirring Tahrir for his own ends.

He sounds like a man looking to start a fight — or at least for the political cover to begin a crackdown on his opponents in the Muslim Brotherhood. Ever since el-Sissi ousted Mohammed Morsi, Egypt’s first democratically elected president, on July 3, the government has increasingly used the “terrorist” label in association with the Muslim Brotherhood. The Egyptian military may desperately need that label to stick—because a threat like terrorism is the perfect legitimizing tool for a government that is being ruled by a military cabal. Having come to power through undemocratic means, the generals know that Egypt’s chaos can make their rule more necessary than ever. [Continue reading…]