(The first part in this series can be read here and an introduction to the series here.)

Truth Lies Open To All?

Lancaster University’s motto – ‘Omnibus Patet Veritas’ very much appealed to me. It means ‘truth lies open to all’. I was fascinated by the contradictions between this ideal and the hidden dimensions of political control – especially in the UK where civil servants were required to sign the Official Secrets Act.

I was working on a range of different techniques for assessing new technologies of political control. This included an examination of the growth of surveillance in the UK, which had significantly changed over the last two decades. It is useful to look at the context in which this research was taking place. For example in 1957 when Lord Birkett produced the official report on telephone interception in the UK, telephone tapping was very much a cottage industry. Since then telephone interception has grown into today’s hitech networks.

Nevertheless when figures were officially updated in 1980, many MP’s were surprised by the relatively modest official increase over the intervening 23 years: from 129 warrants in 1958 to 411 in 1979 for England and Wales. However the 1980 paper on the Interception of Communications did admit that one warrant could cover multiple intercepts on an entire organisation and its members e.g. CND. It was also revealed that the Secretary of State ‘may delegate’ to the civil service the power to amend a warrant. Thus the total number of lines monitored was going to be substantially more than the number of warrants issued.

Another anomaly was revealed when MP Clement Freud asked whether the number of interception orders currently in force was cumulative or whether the number given simply indicated how many new orders had been published. The then Home Secretary, William Whitelaw, refused to answer leaving open the possibility that key permanent warrants for MI5 & Special Branch were only issued once. It might also have been supposed that the development of international terrorism in the early Seventies had further fuelled the growth of telephone surveillance. However the public record showed a different story. The sharp boom in UK telephone tapping came immediately after Birkett, who recommended that in future official figures on tapping should not be made public.

Thus the main growth period in telecommunications surveillance occurred in the Sixties before international terrorism – the ostensible reason for official surveillance in the Eighties – had become a major problem. If anything, the official record shows that the growth rate slackened in 1970, just as terrorism, particularly in Northern Ireland, had intensified. It could not be the full story. In this respect the White Paper gave a clue. It did not cover telephone tapping in the Province, nor did it cover warrants signed by the Foreign Secretary for the Government Communications Headquarters (GCHQ1) and the Secret Intelligence Services, nor tapping warrants signed by the Prime Minister.

These were particularly significant omissions, given that just one permanent warrant signed in 1967 authorized GCHQ to intercept all overseas telegrams. Indeed the sudden drop in Home Secretary warrants after 1975 can be partially explained by this transfer of the surveillance workload from MI5 to GCHQ in conjunction with the US National Security Agency (NSA) and without reference to parliament.

Bypassing formal democratic authorisation and transparency of interceptions thus became a state norm – but how could surveillance researchers ever hope to get evidence of such a top secret network – especially since the penalties under the Official Secrets Act were draconian – up to 14 years in jail? The short answer, as is often the case, was by accident.

Whilst researching another issue of state security structures, a journalist, Peter Laurie, was updating his book, Beneath The City Streets and was seeking the assistance of knowledgeable researchers such as Duncan Campbell. Duncan Campbell even then, was probably the foremost telecommunications researcher of his generation – a journalist who went on to play a pivotal role in exposing ECHELON and identifying the policy grounds needed to bring it back under some semblance of democratic control. Laurie was looking at the emergence of Emergency centres of Government being prepared for World War III, which would create secret citadels to facilitate post nuclear holocaust communication command and control.

Laurie’s thesis was that many of these secret centres were beneath the key nodes in the array of new post office microwave towers, which were springing up around the UK. For Non-British readers it is worth explaining that whilst we have local cable and fibre-optic for our urban telecommunications links, once these leave cities it proved cheaper to send them longer distances by a network of microwave towers or antennae spaced at distances of approximately twenty miles. Such microwave beams are relatively accessible to interception by another microwave beam crossing their path.

Laurie had published some pictures of some of these towers in the Sunday Times and in 1977 the time was ripe to update his book and publish a full map of where the towers were located. The assumptions were completely fallacious but it led a small group of researchers to model the UK entrails of ECHELON without realizing the true significance of their activities until the state severely overreacted.

I unwittingly got caught up in the dragnet following a request from Duncan Campbell to take some pictures of my local telephone microwave node – an aerial or antennae located near a moor named the Quernmore – and also the designation of the larger antennae by Langthwaite House. What happened next proved to be a major turning point in the confidence of surveillance scholars to research state structures. Apart from David Wood’s (2001) excellent thesis, little has been written about the personal side of getting caught up in such an enterprise. This was my experience of mapping what turned out to be an illegal paradigm.

I had been asked to conduct field research in its most literal sense. I was to go out into a field, take an image of a construct, note its configuration and share that information with a network which would use the data to affect political change. This was a perspective consistent with my overall drive. I remain uncomfortable with research which can be deemed to be ‘social astronomy’ or what less generous colleagues characterise as ‘academic masturbation.’ In my view the whole point of doing such work is to be applied, and that means directing surveillance studies to policy change. Such ‘research activism’ is easier said than done – although the first steps, in this case, are relatively simple. 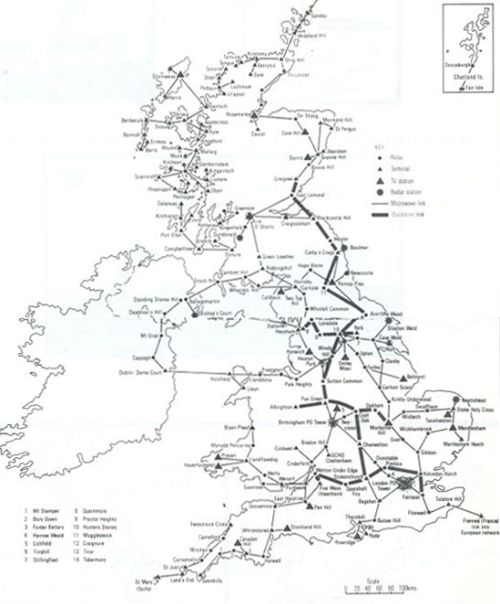 In theory, the practical research steps required to uncover any such secret surveillance links were a technically straightforward, albeit arduous undertaking. A map of the legitimate telephone network was compiled on the basis of telephone directories and associated exchanges. This pattern of links, which are officially in place to relay calls, can then be compared with a map of relays actually found from field research. Microwaves travel in straight lines over relatively short distances so it is simply a question of using compass map and ruler to find the next relay in the grid.2 The ‘field map’ is then simply subtracted from the official map using what are, in methodological terms, essentially Mills’ methods of addition and subtraction3. The anomalous system came to light. (See Figure 1). 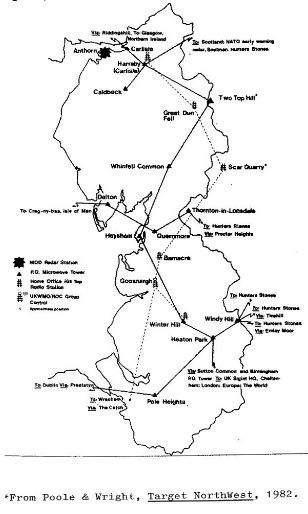 Figure 2: the location of the Quernmore Aerial

I took the original pictures during the Winter of 1977 using a simple instamatic camera, it even had shots of Damon, my baby boy, on the reel. I sent it off to Duncan Campbell, together with a map explaining that a dish faced in the direction of Northern Ireland and a horn was pointing in the direction of the Yorkshire Moors and Menwith Hill. The significance of the orientation of specific horns and dishes is that they provide a precise direction of the next link in the chain.

In fact the Quernmore aerial (Figure 2), was connected by a series of other relays such as Thornton in Lonsdale (Figure 3) and Hunters Stones via Proctor Heights before being physically linked to the NSA site (Figure 4). A short time later on February 18 1977, Duncan Campbell was arrested under section 2 of the Official Secrets Act, because he and a fellow journalist met with a soldier to discuss questions of signals intelligence. Nothing much of significance was exchanged that night but because Campbell’s telephone was bugged, police knew of the meeting which was a technical breach of the British Official Secrets Act which all members of Her Majesty’s Forces sign. Once Duncan was arrested, his correspondence addresses provided the target list for further arrests – including one chap who sent him a Christmas card, and in the end, me. 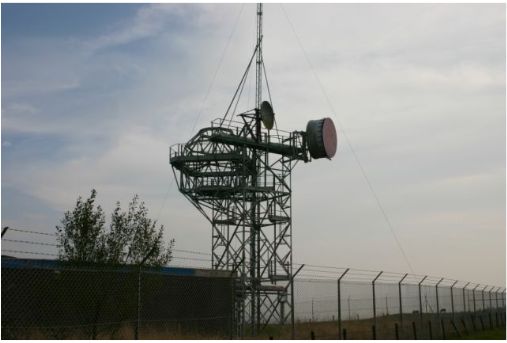 Researching such systems was previously thought to be legal, if only open sources were used. How can a secret be a secret if it isn’t really secret? After all, the Sunday Times had already published a compendium of such aerial photographs. The mistake in this assumption was that research on intelligence could easily be re-designated by the authorities as intelligence itself. The added value of what could be seen as ‘mere’ academic modelling was that an analysis of classified data would have yielded the same results. The research paradigm was then tantamount to an illegal vision and although the logic seems very ‘Alice in Wonderland’, the same tactics to challenge researchers were used repeatedly during that period. There were several testing trials of researchers attempting to understand the role and function of arrays of various antennae in those days using just open sources. The ABC trial in England (essentially the Duncan Campbell case), the Rabbit Trial in Oslo which centred on peace researchers who were examining secret configurations of such antennae in Norway, the Wilkes Trial in Sweden which used various open lists to model military activities and the Christensen trial in Denmark. The military authorities in all these cases attempted to legally restrict empirical research on state surveillance structures.4 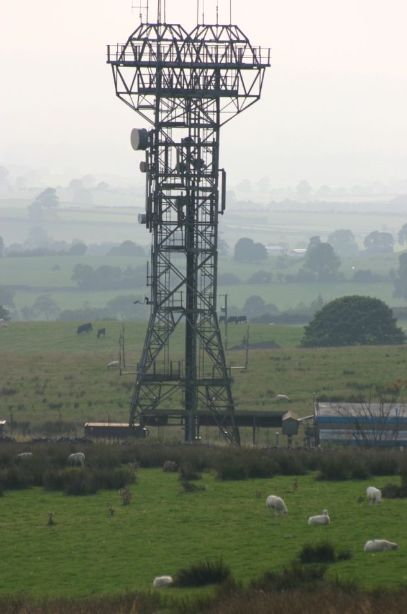 1. GCHQ is the British node of ECHELON – a telecommunications interceptions sub-network very much dependent on the superior technology and logistics of its bigger American Brother, the NSA

3. This is a classical methodology for identifying logical arguments of induction and deduction

(This article originally appeared in Surveillance & Society 3 (2/3) and is republished here with the permission of the author.)