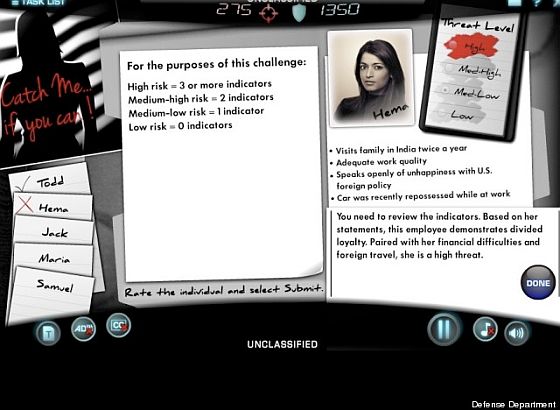 A security training test created by a Defense Department agency warns federal workers that they should consider the hypothetical Indian-American woman a “high threat” because she frequently visits family abroad, has money troubles and “speaks openly of unhappiness with U.S. foreign policy.”

That slide, from the Defense Information Systems Agency (DISA), is a startling demonstration of the Obama administration’s obsession with leakers and other “insider threats.” One goal of its broader “Insider Threat” program is to stop the next Bradley Manning or Edward Snowden from spilling classified or sensitive information.

But critics have charged that the Insider Threat program, as McClatchy first reported, treats leakers acting in the public interest as traitors — and may not even accomplish its goal of preventing classified leaks.

DISA’s test, dubbed the “CyberAwareness Challenge,” was produced in October 2012, a month before the Obama administration finalized its Insider Threat policy. The slide about Hema is included in a section of the training about “insider threats,” which are defined by an accompanying guide as “threats from people who have access to the organization’s information systems and may cause loss of physical inventory, data, and other security risks.” [Continue reading…]

4 thoughts on “The new McCarthyism: Unhappy with U.S. foreign policy? Obama administration thinks you might be a threat to America”