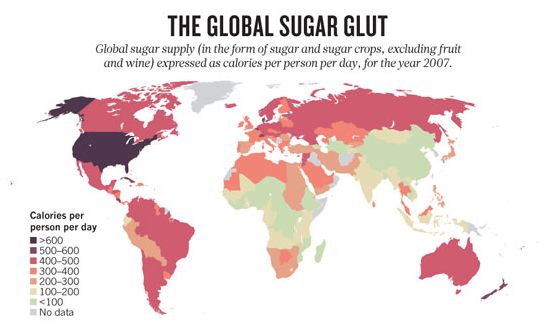 Nature World News: A diet in which 25 percent of one’s calories come from added sugar could be just as harmful to a person’s health as being the inbred offspring of first cousins, a new study conducted by University of Utah researchers found.

The scientists chose this threshold due to the National Research Council’s formal recommendation that a person’s calories from added sugar not exceed 25 percent of their total caloric consumption. However, even this may be far too much, according to the study’s results which found female mice died at twice the normal rate and males were a quarter less likely to hold territory and reproduce when fed the diet reflective of many Americans.

“Our results provide evidence that added sugar consumed at concentrations currently considered safe exerts dramatic adverse impacts on mammalian health,” the researchers said regarding their findings published in the journal Nature Communications, adding they were careful to keep the administered levels of sugar proportionate to the amount consumed by humans through candy, beverages and baked goods. For example, the researchers stressed that the mice’s diet directly corresponded with one in which a person drinks three sodas a day “plus a perfectly healthy, no-sugar-added diet.”

According to Wayne Potts, a biology professor and the study’s senior author, the researchers placed groups of mice in room-sized pens with multiple nest boxes and allowed the mice to compete more naturally for mates and desirable territories, thereby revealing even subtle effects of the diet on mice’s behavior.

As a result, the scientists found 35 percent of females on the extra sugar diet died after 32 weeks in the mouse barns versus 17 percent of the control group. And while no difference appeared in the case of the rate of death for the male mice, those on the added-sugar diet acquired and held 26 percent fewer territories than males on the control diet and ultimately went on to produce 25 percent fewer offspring.

Such “level of health degradation is almost identical,” the researchers pointed out, to that of cousin-level inbreeding and persisted despite a lack of obesity and few metabolic symptoms. [Continue reading…]