The Guardian reports: A senior government official responsible for promoting positive images of Israel on social media networks has been ordered to stop posting offensive statements on his Facebook page. 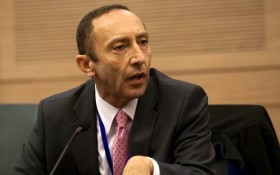 The gagging order followed a series of trenchant comments made by Daniel Seaman, who recently took up the post of head of Israeli public diplomacy on the internet, over the past few months.

They included a response to a demand by the Palestinian chief negotiator, Saeb Erekat, for an end to new settlement expansion that read: “Is there a diplomatic way of saying ‘Go F*** yourself’?”

At the start of the Muslim holy month of Ramadan, when Muslims fast between sunrise and sunset, Seaman posted: “Does the commencement of the fast of the Ramadan means that Muslims will stop eating each other during the daytime?”

In response to a Church of Scotland report that argued that Jews do not have a divine right to the land, he wrote: “Why do they think we give a flying F*** what you have to say?”

Japanese diplomats complained about comments Seaman made on commemorations for the victims of the 1945 atomic bombs. “I am sick of the Japanese, ‘Human Rights’ and ‘Peace’ groups the world over holding their annual self-righteous commemorations for the Hiroshima and Nagasaki victims,” he wrote. “Hiroshima and Nagasaki were the consequence of Japanese aggression. You reap what you sow…”