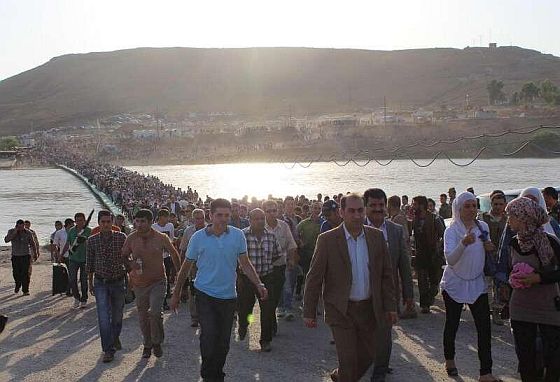 For Americans to grasp the magnitude of the crisis in Syria, it’s worth drawing some comparisons and imagining what this would look like here.

Imagine this: Every single person in California, Texas, New York, and Florida has fled their home. Nearly everyone who once lived in California is now a refugee in Mexico and has little more than a sheet of canvas to protect themselves from the sun. The rest of the world sees on their TV screens the misery of America and everyone agrees its awful but then carries on living their life as though nothing was happening.

RTÉ reports: The United Nations has said that nearly seven million Syrians have been displaced by the civil war, which is almost one third of the population.

Another two million had sought refuge in the neighbouring countries of Lebanon, Jordan, Turkey and Iraq.

More refugees are expected to leave the country in advance of an anticipated airstrike by the US military following what it said was a chemical weapons attack the US blames on President Bashar al-Assad’s forces.

Lebanon has around one million people, either refugees who have formally registered, or others who have moved into employment, or who have enough resources of their own not to declare themselves refugees.

The influx is putting a strain on Lebanon’s meagre resources, according to the International Crisis Group.

6 thoughts on “One third of Syrian population displaced by war”