In the rather pretentious form of a “memorandum” for “the president”, former CIA analyst Ray McGovern writes:

There is a growing body of evidence from numerous sources in the Middle East — mostly affiliated with the Syrian opposition and its supporters — providing a strong circumstantial case that the August 21 chemical incident was a pre-planned provocation by the Syrian opposition and its Saudi and Turkish supporters. The aim is reported to have been to create the kind of incident that would bring the United States into the war.

According to some reports, canisters containing chemical agent were brought into a suburb of Damascus, where they were then opened. Some people in the immediate vicinity died; others were injured.

We are unaware of any reliable evidence that a Syrian military rocket capable of carrying a chemical agent was fired into the area. In fact, we are aware of no reliable physical evidence to support the claim that this was a result of a strike by a Syrian military unit with expertise in chemical weapons.

Do these guys have no internet access? Of course that’s a facetious question. Even though I applaud the stand that many of these folks took in opposing the war in Iraq and continue to take on issues such as mass surveillance, the willingness of former intelligence analysts to attach their names to a statement like this should be taken as yet another indication that the term, U.S. intelligence, is an oxymoron.

“We are unaware…” “we are aware of no reliable physical evidence…” — this sounds like James Clapper testifying in Congress. Rather than parade their lack of awareness, maybe they should spend more time doing research and less time issuing memoranda.

Some people may feel that anything appearing on YouTube can’t qualify as reliable evidence, so if that includes you, don’t bother reading any more of this post.

What follows is primarily based on the work of Eliot Higgins who runs Brown Moses Blog. He has distinguished himself as one of the leading analysts of weapons being used in Syria and I see in his work no evidence that he has any political axe to grind. Even now, he suspends judgement on whether chemical weapons have been used and leaves this to be determined by the UN. Where he has focused a lot of attention is on the munitions associated with alleged chemical weapons attacks and this is where his work has recently been most informative.

Soon after August 21, when the false flag brigade swung into action, one of the first “smoking guns” to become popular was a video showing rebels using artillery fired gas tanks:

A couple of problems with this particular piece of “evidence” quickly emerged. Firstly, the original video turned out to be a month old, so the attack being shown clearly wasn’t the one that occurred on August 21. But more importantly, the weapon itself was already well-known — an improvised devise dubbed the “Hell Cannon.” Its producers were so proud of their accomplishment they created a promotional video showing how they turn propane tanks into fertilizer-filled bombs that can then be fired out of a cannon. While the video shows the ingenuity with which Syria’s rebels have made use of their scant resources (proof, incidentally, that contrary to a widely held belief, Syria is not awash in foreign supplied weapons), more than anything it shows the crudeness of the kinds of devices that can be created in a welding shop. Keep this in mind when reviewing the evidence that follows.

At this time, among reasonable observers, there is little doubt that a large number of Syrians died on August 21 and the dozens of videos available showing victims, strongly indicate that the cause of death was some kind of lethal airborne chemical.

McGovern and his fellow intel retirees apparently believe that the source of the deadly chemical was canisters that had been brought into the areas where the deaths took place and that the canisters had accidentally been opened.* I can’t quite figure whether this is supposed to be a false flag operation or a false flag operation gone wrong. In any case McGovern claims there is a “growing body of evidence from numerous sources in the Middle East” to support this theory.

McGovern is employing a commonly used rhetorical ploy when he says this: he is citing evidence yet gives no indication that he knows what this “evidence” actually is. Perhaps the evidence is so technical that one would need to be an intelligence professional to understand it, or, more likely, he hasn’t a clue whether there actually is any such evidence and is merely parroting someone else’s claim that such evidence exists.

My attitude is: show me the evidence, then I’ll decide whether it’s compelling. As things stand, all McGovern is doing is circulating rumors.

Eliot Higgins, on the other hand, has evidence that merits careful examination and it starts with the video below. (I posted a shorter version of this previously but it’s worth watching the whole thing.)

The first thing to note is a gray missile that can be seen at the beginning of the video being delivered to a missile launcher. The missile is about ten feet long with small guidance fins at the right end and a tank at the other that’s roughly 18″ wide and 36″ long. Above the missile is an orange hydraulic hoist that is presumably used to move the missile from the delivery vehicle to the launch vehicle. (The video does not show this happening. We see the launch vehicle without missile and then with missile.) 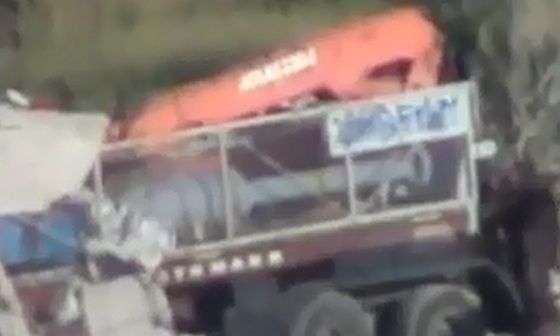 Aside from noting the dimensions and shape of the missile itself, it’s also worth noting the delivery vehicle: a new Mercedes tractor and trailer with hydraulic lift adds up to an expensive item, way beyond the means of any militia that is struggling just to pay for its bullets.

In a screenshot from an edited copy of the same video, the assumed structure of the missile (seen a fraction of a second after its launch) is highlighted:

As Higgins notes, this is a missile design that has not been observed anywhere outside Syria. Unlike the Hell Cannon, this is not simply an explosive projectile – it is a rocket and as photographs below and the videos above make clear, the missile itself is industrially engineered, its design must have been rigorously tested, and the delivery system costs tens of thousands of dollars — multiple reasons to believe that this was not improvised by rebels.

One of the features of chemical weapons that has been widely noted is that they only carry a small amount of explosive — they are designed to rip open on impact and as a result much of such a missile can be recovered. As a result a lot of evidence on the form of the missiles has been gathered at the site of the alleged chemical attacks.

One of Higgins’ findings has been that there are at least two forms of the missile linked to the chemical attacks. One believed to be armed with chemical agents and another with high explosives. The video below shows the latter variety in a missile that failed to explode and which is being dismantled by a rebel group in order to salvage the explosives. The shape of the missile corresponds with the one appearing above.

Among those who are skeptical about the claim that the regime would use chemical weapons at this time — a period in which their power seems to be on the rise — a question reasonably posed is this: Why now? What motivation could they have for an attack that would seem to be contrary to their own interests?

Firstly, the presence of rebels in the districts that were under attack has been intractable and poses a real threat to the security of the regime and Damascus. But the question, why now? contains within it what may be a false assumption: that chemical weapons have not already been used with some frequency.

While August 21 stands out because of the death toll, there have been several cases in which chemical weapons are believed to have been used before. The following disturbing video posted on YouTube in early August shows a dog in convulsions and several other dead animals, all of which appear to be victims of a chemical attack. The twisted remains of a missile nearby resemble the structure of the missile shown above, minus the canister casing which would have ripped off on impact.

The use of a design which could carry either high explosives or chemical agents may have been conceived specifically so that the use of chemical weapons could be concealed in the event that the sites of these attacks were later subject to inspection.

Needless to say, none of this amounts to proof about what happened. Nevertheless, this is what I think can reasonably be called evidence-based speculation as opposed to rumor-based speculation of the kind Ray McGovern and others are promoting.

If in due course it becomes established with reasonable confidence (confidence not merely among Obama administration officials but also independent observers and the public at large) that chemical weapons were indeed used by the Assad regime on August 21, does that mean that the United States is both justified and wise in launching an attack on Syria in order to punish Assad and deter future use of chemical weapons?

The Obama administration is pressing its case as though such proof closes the argument. The argument about whether chemical weapons were used thus has less to do with the facts and is instead functioning as a proxy argument. Those who oppose military strikes seem to think they can only do so by questioning who was responsible for the chemical attack — some go a step further and question whether such an attack even took place.

The fundamental problem with this kind of skepticism is that as the administration convinces Americans that a devastating chemical weapons attack took place and that the Assad regime is most likely responsible, then the more solid this position becomes, the more willing people will be to defer to the administration in determining an appropriate response.

What the administration has not even attempted to demonstrate is why its plan for a calibrated attack would have much chance of bringing about its desired effect.

There is however one outcome from a U.S. attack on Syria that is virtually certain: Syria will become even more inaccessible to journalists and as a result the plight of its people will shift from garnering little American attention to no attention at all.

* A reader has correctly pointed out that McGovern did not describe the alleged opening of the alleged containers containing the alleged chemicals as having occurred accidentally. McGovern wrote: “According to some reports, canisters containing chemical agent were brought into a suburb of Damascus, where they were then opened.” Since it has been widely distributed, I’m assuming that the reports he’s referring to include a report in Mint Press in which a rebel is quoted saying, “unfortunately, some of the fighters handled the weapons improperly and set off the explosions.” Since McGovern didn’t provide links to any of his sources, he has left it to his readers to engage in a certain amount of guesswork.

5 thoughts on “The folly of the false flag brigade”