Brown Moses Blog: In light of today’s report from the UN confirming the use of sarin in the August 21st attacks in Damascus, I thought I’d take a look at the open source evidence of who is responsible. I’ll be looking at evidence that’s freely available for anyone to examine, rather than what German spy boats may or may not of heard, or intelligence reports that tell us they have evidence, but don’t actually show the evidence. As always, evidence does not automatically equal proof, so it’s up to you to decide if this information proves one side or the other was responsible.

Two munitions have been linked to the attack, the M14 140mm artillery rocket, and a munition I’ve previously referred to as the UMLACA (Unidentified Munition Linked to Alleged Chemical Attacks).

The UN inspectors have now confirmed both munitions carried a chemical payload, so the question is, who used them? In the 18 months I’ve been studying the arms and munitions in the conflict I have never seen either type of munition used by the opposition. The opposition has rocket artillery, for example the 107mm Type-63 multiple rocket launcher and the Croatian 128mm RAK-12, but I’ve never seen any sign of the 140mm systems (such as the BM-14) that would be used to launch the M14 artillery rocket. [Continue reading…]

Photographs of the warhead components shown in the UN report: 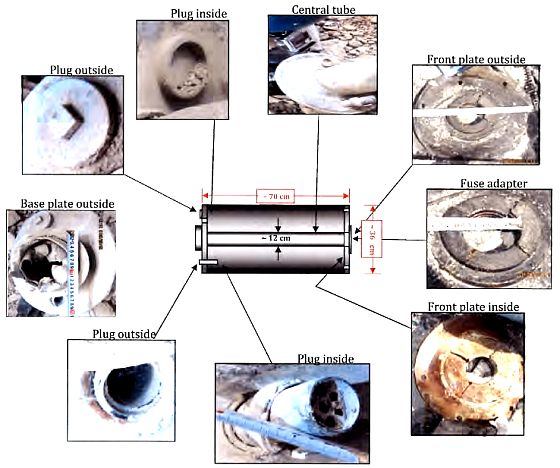