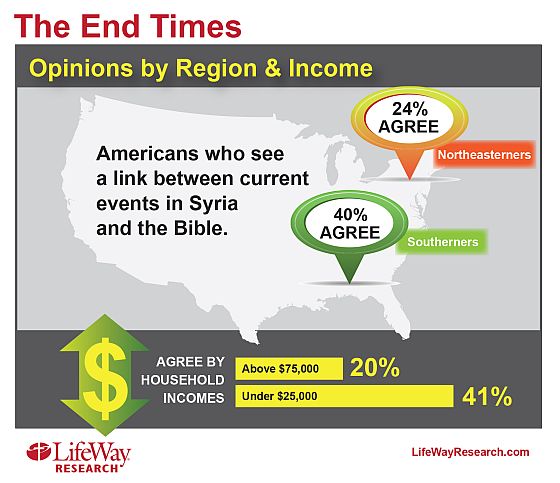 Americans are famous for their optimism, yet a third of Americans think that the end of the world is just around the corner. And this is the scariest part of that equation: the people who believe in Armageddon also think they are going to heaven.

In the culture of fear promoted by the national security state, the icon of ultimate menace is the terrorist who is willing to martyr himself, yet with its vast armies of End Times believers, America itself surely poses a much graver threat to the world when a large proportion of the population believe that there personal salvation is linked to global destruction.

Lifeway Research: The threat of airstrikes against Syria has more than a few Americans thinking about the end of the world.

A recent poll from Nashville-based LifeWay Research found that almost one in three Americans see Syria’s recent conflict as part of the Bible’s plan for the end times.

One in four think that a U.S. military strike in Syria could lead to Armageddon. One in five believes the world will end in their lifetime.

Previous U.S. military action, like the war in Afghanistan or air strikes during 1990s war in Bosnia, didn’t get the same reaction, said Stetzer. But the fact that Syria shares a border with Israel, and is specifically mentioned in the Bible, has people thinking about the end times.

“We weren’t talking about Armageddon during the air strikes on Bosnia,” he said.

Israel and the End Times

That theology inspired the best-selling Late Great Planet Earth in the 1970s as well as the Left Behind book series. A big budget remake of Left Behind is currently in the works.

Most premillennial dispensationalists believe Christians will instantly disappear from the earth during an event called the rapture, followed by seven years of war and catastrophe. After the battle of Armageddon, Jesus will return and set up his kingdom on earth.

Stetzer said he could see why linking Bible prophecy to Syria is appealing to many Christians.

It’s not that Christians want the world to end or want to see airstrikes, which will lead to suffering, Stetzer said. But they do want Jesus to return to set things right.

“For Christians, the end of the world doesn’t mean despair,” he said. “The end is really a new beginning.”

LifeWay Research asked three questions about Syria and the end of the world as part of a telephone survey of 1,001 Americans conducted September Sept. 6-10, 2013.

Thirty-two percent of those polled agree with the statement, “I believe the battles in Syria are all part of the prophecies of the Book of Revelation,” Forty-nine percent disagree.

Twenty-six percent of those surveyed agree with statement, “I believe that U.S. military intervention in Syria might lead to the Battle of Armageddon that’s spoken about in the Book of Revelation.”

Women (36 percent) are more likely than men (28 percent) to see a link between current events in Syria and the Bible.

The biggest difference came when people responded to the statement, “I believe the world will end in my lifetime.”

Religion and age also played in a role in how people responded to the poll.

Those who attend worship once or twice a month are more likely to see a tie between Syria’s trouble and the book of Revelation (51 percent agree), as are evangelical, born again, and fundamentalist Christians (58 percent agree.)

Fewer of those who rarely (25 percent) or never attend (14 percent) agree.

About a third (32%) of evangelical, born-again, fundamentalist Christians believe the world will end in their lifetime.

The Rev. Mark Hitchcock, pastor of Faith Bible Church in Edmond, Okla., believes the Bible does predict future events in the Middle East.

But Hitchcock, who teaches about Bible prophecy at Dallas Theological Seminary—an institution historically connected to dispensationalism– and authored The End: A Complete Overview of Bible Prophecy and the End of Days, doesn’t think the trouble in Syria was predicted in the Bible.

That makes them more likely to see unrest in the Middle East as a sign that God is acting in the world.

Given that Lifeway Research is a Christian organization, some readers might be skeptical about its polling methods being free from bias, but as far as I can tell from this FAQ, they use industry-standard techniques to ensure accurate polling results.

3 thoughts on “One in three Americans link Syria to Armageddon”