Union of Concerned Scientists: In the next few days the Arctic sea ice will reach its minimum extent for 2013. At the end of this year’s summer melt season, the areal extent covered by sea ice was more than a million square kilometers below the 30-year average. That’s a lot of ice missing compared to an average year. An area of frozen ocean—ten times the size of Indiana, or four times the size of Colorado, or a third bigger than Texas—is just not there this summer.

While this is shocking and part of a several-decade decline in Arctic sea ice, what’s also alarming is the lack of substantive media coverage. The decline in Arctic sea ice should concern all of us in the same way that a collapse of the economic system does. It deserves front page billing. A recent Nature commentary stated that “the costs of a melting Arctic will be huge, because the region is pivotal to the functioning of Earth systems such as oceans and the climate.” They don’t mince their words.

Here are five reasons why the decline of the Arctic sea ice matters:

When bright, reflective sea ice melts, it gives way to a darker ocean. More heat is absorbed by a darker surface, leading to more warming. This is known as the ice-albedo feedback effect. Largely due to the recent dramatic loss of sea ice and this feedback, the Arctic is now warming at twice the global rate. [Continue reading…]

National Geographic depicts the world without ice: All the ice on land has melted and drained into the sea, raising it 216 feet and creating new shorelines for our continents and inland seas.

There are more than five million cubic miles of ice on Earth, and some scientists say it would take more than 5,000 years to melt it all. If we continue adding carbon to the atmosphere, we’ll very likely create an ice-free planet, with an average temperature of perhaps 80 degrees Fahrenheit instead of the current 58. 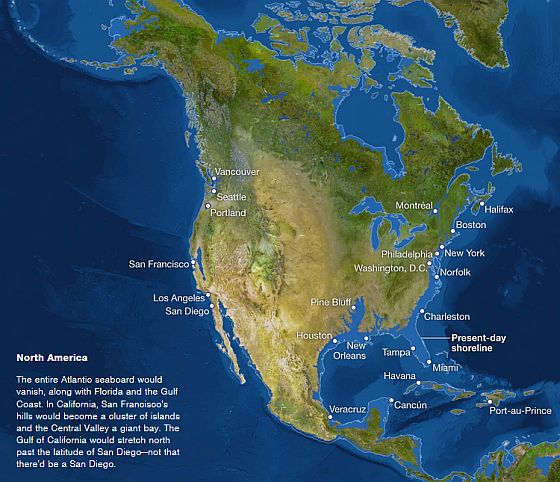