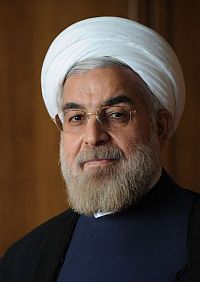 Hassan Rouhani, the president of Iran, writes in the Washington Post: Three months ago, my platform of “prudence and hope” gained a broad, popular mandate. Iranians embraced my approach to domestic and international affairs because they saw it as long overdue. I’m committed to fulfilling my promises to my people, including my pledge to engage in constructive interaction with the world.

The world has changed. International politics is no longer a zero-sum game but a multi-dimensional arena where cooperation and competition often occur simultaneously. Gone is the age of blood feuds. World leaders are expected to lead in turning threats into opportunities.

The international community faces many challenges in this new world — terrorism, extremism, foreign military interference, drug trafficking, cybercrime and cultural encroachment — all within a framework that has emphasized hard power and the use of brute force.

We must pay attention to the complexities of the issues at hand to solve them. Enter my definition of constructive engagement. In a world where global politics is no longer a zero-sum game, it is — or should be — counterintuitive to pursue one’s interests without considering the interests of others. A constructive approach to diplomacy doesn’t mean relinquishing one’s rights. It means engaging with one’s counterparts, on the basis of equal footing and mutual respect, to address shared concerns and achieve shared objectives. In other words, win-win outcomes are not just favorable but also achievable. A zero-sum, Cold War mentality leads to everyone’s loss.

Sadly, unilateralism often continues to overshadow constructive approaches. Security is pursued at the expense of the insecurity of others, with disastrous consequences. More than a decade and two wars after 9/11, al-Qaeda and other militant extremists continue to wreak havoc. Syria, a jewel of civilization, has become the scene of heartbreaking violence, including chemical weapons attacks, which we strongly condemn. In Iraq, 10 years after the American-led invasion, dozens still lose their lives to violence every day. Afghanistan endures similar, endemic bloodshed.

The unilateral approach, which glorifies brute force and breeds violence, is clearly incapable of solving issues we all face, such as terrorism and extremism. I say all because nobody is immune to extremist-fueled violence, even though it might rage thousands of miles away. Americans woke up to this reality 12 years ago.

My approach to foreign policy seeks to resolve these issues by addressing their underlying causes. We must work together to end the unhealthy rivalries and interferences that fuel violence and drive us apart. We must also pay attention to the issue of identity as a key driver of tension in, and beyond, the Middle East.

At their core, the vicious battles in Iraq, Afghanistan and Syria are over the nature of those countries’ identities and their consequent roles in our region and the world. The centrality of identity extends to the case of our peaceful nuclear energy program. To us, mastering the atomic fuel cycle and generating nuclear power is as much about diversifying our energy resources as it is about who Iranians are as a nation, our demand for dignity and respect and our consequent place in the world. Without comprehending the role of identity, many issues we all face will remain unresolved.

I am committed to confronting our common challenges via a two-pronged approach.

First, we must join hands to constructively work toward national dialogue, whether in Syria or Bahrain. We must create an atmosphere where peoples of the region can decide their own fates. As part of this, I announce my government’s readiness to help facilitate dialogue between the Syrian government and the opposition.

Second, we must address the broader, overarching injustices and rivalries that fuel violence and tensions. A key aspect of my commitment to constructive interaction entails a sincere effort to engage with neighbors and other nations to identify and secure win-win solutions.

We and our international counterparts have spent a lot of time — perhaps too much time — discussing what we don’t want rather than what we do want. This is not unique to Iran’s international relations. In a climate where much of foreign policy is a direct function of domestic politics, focusing on what one doesn’t want is an easy way out of difficult conundrums for many world leaders. Expressing what one does want requires more courage.

After 10 years of back-and-forth, what all sides don’t want in relation to our nuclear file is clear. The same dynamic is evident in the rival approaches to Syria.

This approach can be useful for efforts to prevent cold conflicts from turning hot. But to move beyond impasses, whether in relation to Syria, my country’s nuclear program or its relations with the United States, we need to aim higher. Rather than focusing on how to prevent things from getting worse, we need to think — and talk — about how to make things better. To do that, we all need to muster the courage to start conveying what we want — clearly, concisely and sincerely — and to back it up with the political will to take necessary action. This is the essence of my approach to constructive interaction.

As I depart for New York for the opening of the U.N. General Assembly, I urge my counterparts to seize the opportunity presented by Iran’s recent election. I urge them to make the most of the mandate for prudent engagement that my people have given me and to respond genuinely to my government’s efforts to engage in constructive dialogue. Most of all, I urge them to look beyond the pines and be brave enough to tell me what they see — if not for their national interests, then for the sake of their legacies, and our children and future generations.

[Note: I am typically fastidious about including links that appear in the original publication of any article since the choice of links is just as much a matter of authorship as is the choice of words. In this case, however, I have left out the links which all point to other articles in the Washington Post. It’s possible that Rouhani particularly likes the Post’s coverage of the issues, or that he recognizes the need of the struggling paper to capitalize on the traffic his op-ed will be bringing in today. More likely, though, is that the inclusion of these links can be attributed to a bit of opportunistic “initiative” on the part of an online editor.]