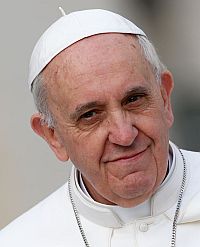 You don’t have to be a Jesuit, or a Catholic, or a Christian, or even religious, to appreciate the new pope. Quite simply, Pope Francis exudes a great deal of humanity and for that reason alone is likely to be of immense influence both inside and outside the Catholic church.

While sharing the sense, widely noted, that Francis is a man of genuine humility, just as importantly he strikes me as a real philosopher. But what do I mean by real philosopher?

When I went to university, I went to study philosophy, but I had a very naive view about what that meant and quickly became disenchanted. What I learned was that in an academic environment hardly anyone practices philosophy. It is a purely intellectual pursuit and it focuses largely on the philosophical work of others. Least of all is it a pursuit whose primary purpose is that it should provide the tools of life. There are in academic philosophy very few real philosophers. The life of the mind is sequestered as though the intellect might usefully function without having any real bearing on the social and material world.

Most people who focus on the question, how should I live?, will likely turn sooner or later to religion. Yet religion, even in an era where religious choices are no longer narrowly circumscribed by culture, can be frustrating for those who are philosophically inclined and believe in the importance of independent thinking. Religion too often comes burdened by dogma and the anti-intellectual orientation of faith.

For the non-religious, it’s easy to dismiss an individual who has been invested with the institutional authority of a pope, because such a figure is assumed to function as the preeminent and most powerful defender of dogma. This is why it’s so interesting to listen to Francis — a man who is not only defying a lot of the stereotypes about the papacy, but who is demonstrating what it means to be a real philosopher.

Here’s an example that comes from a penetrating interview conducted by a fellow Jesuit (the religious order founded by Ignatius of Loyola), Antonio Spadaro, and published in America, the weekly Catholic magazine:

I ask Pope Francis about the fact that he is the first Jesuit to be elected bishop of Rome: “How do you understand the role of service to the universal church that you have been called to play in the light of Ignatian spirituality? What does it mean for a Jesuit to be elected pope? What element of Ignatian spirituality helps you live your ministry?”

“Discernment,” he replies. “Discernment is one of the things that worked inside St. Ignatius. For him it is an instrument of struggle in order to know the Lord and follow him more closely. I was always struck by a saying that describes the vision of Ignatius: non coerceri a maximo, sed contineri a minimo divinum est (“not to be limited by the greatest and yet to be contained in the tiniest — this is the divine”). I thought a lot about this phrase in connection with the issue of different roles in the government of the church, about becoming the superior of somebody else: it is important not to be restricted by a larger space, and it is important to be able to stay in restricted spaces. This virtue of the large and small is magnanimity. Thanks to magnanimity, we can always look at the horizon from the position where we are. That means being able to do the little things of every day with a big heart open to God and to others. That means being able to appreciate the small things inside large horizons, those of the kingdom of God.

“This motto,” the pope continues, “offers parameters to assume a correct position for discernment, in order to hear the things of God from God’s ‘point of view.’ According to St. Ignatius, great principles must be embodied in the circumstances of place, time and people. In his own way, John XXIII adopted this attitude with regard to the government of the church, when he repeated the motto, ‘See everything; turn a blind eye to much; correct a little.’ John XXIII saw all things, the maximum dimension, but he chose to correct a few, the minimum dimension. You can have large projects and implement them by means of a few of the smallest things. Or you can use weak means that are more effective than strong ones, as Paul also said in his First Letter to the Corinthians.

“This discernment takes time. For example, many think that changes and reforms can take place in a short time. I believe that we always need time to lay the foundations for real, effective change. And this is the time of discernment. Sometimes discernment instead urges us to do precisely what you had at first thought you would do later. And that is what has happened to me in recent months. Discernment is always done in the presence of the Lord, looking at the signs, listening to the things that happen, the feeling of the people, especially the poor. My choices, including those related to the day-to-day aspects of life, like the use of a modest car, are related to a spiritual discernment that responds to a need that arises from looking at things, at people and from reading the signs of the times. Discernment in the Lord guides me in my way of governing.

“But I am always wary of decisions made hastily. I am always wary of the first decision, that is, the first thing that comes to my mind if I have to make a decision. This is usually the wrong thing. I have to wait and assess, looking deep into myself, taking the necessary time. The wisdom of discernment redeems the necessary ambiguity of life and helps us find the most appropriate means, which do not always coincide with what looks great and strong.”