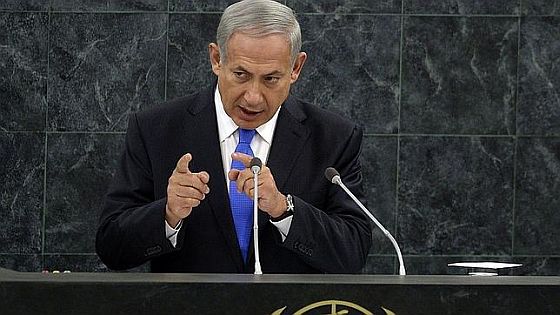 After Benjamin Netanyahu had delivered a speech at the U.N. which surprised no one, Chemi Shalev wrote:

In the streets and avenues leading up to the UN building on the East River, it was already clear the ball has long been over: the barricades were gone, the policemen were relaxed, the satellite trucks had moved elsewhere, the tension and anticipation of the first few days, when Rohani was in town, had all but dissipated. Inside the hall only a fraction of the fatigued foreign diplomats remained to hear Netanyahu, the last head of the state on the agenda, and even they seemed mainly anxious to go home and get back to their normal lives.

The situation in the media, where Netanyahu hopes to make an impact, wasn’t much better. A few hours after the US government had shut down many of its operations, with news networks anxiously breaking to their reporters in the Rose Garden where President Obama was set to make a statement; it was hard to drum up too much interest, not to mention excitement and buzz, over Netanyahu’s strident speech at the UN.

Because in the end, the Israeli prime minister gave the speech that everyone expected him to make, and, much to the media’s disappointment, he didn’t even bother this time to come up with an eye-catching gimmick for visuals.

Barak Ravid writes: One by one, Netanyahu’s donors, associates and supporters flocked in to watch. Casino magnate and owner of the Hebrew daily Yisrael Hayom, Sheldon Adelson, was followed by American-Jewish attorney Alan Dershowitz, former advisor Dore Gold, family friend Zeev Rubinstein and others. Last to enter was Sara Netanyahu, who took her place near the podium. When Netanyahu made his entrance, in front of a half-empty, drowsy hall, his friends, advisors, supporters and entourage all rose to their feet and applauded for several minutes.

Still, the fans the in stands hardly helped. The prime minister’s address resembled a game of the Israeli national soccer team. After weeks of aggressive marketing, spins, headlines and high expectations, the result was disappointing. We hoped to make it to the World Cup, but will have to do with the League Cup.

Netanyahu’s speech was tired, bothersome and boring. In contrast to the Iranian President Hassan Rohani’s sophisticated PR campaign, which led to his taking the UN by storm, Netanyahu sounded like an old, scratchy vinyl record. Not only did he fail to come up with a new effect that would call world attention to the Iranian nuclear threat, such as last year’s cartoon, the prime minister failed to offer any new pertinent information.

The New York Times reported: Mr. Netanyahu dismissed any thought of allowing Iran to enrich uranium to even a low level, insisting that the only way to assure it would never build a nuclear weapon was a complete dismantlement of its capability to enrich nuclear fuel. He exhorted the West to intensify economic sanctions on Iran instead of easing them, as Mr. Rouhani has demanded.

“I wish I could believe Rouhani, but I don’t,” Mr. Netanyahu told the General Assembly, where Iran’s seats were vacant. “Because facts are stubborn things.”

He said the international response to Iran’s entreaties for sanctions relief should be “distrust, dismantle and verify,” and he repeated his warnings that Israel reserved the right to preemptively strike Iran’s nuclear facilities if it deemed the Iranians were close to producing nuclear weapons.

Mohammad Khazaee, Iran’s ambassador to the United Nations, said afterward that his country had found Mr. Netanyahu’s speech inflammatory, rejected the notion that Iran was building a nuclear arsenal, and asserted its right to self-defense.

“The Israeli Prime Minister better not even think about attacking Iran let alone planning for that,” the Iranian ambassador said. He capped his remarks by saying that Iran’s “smile policy” was better than “lying.”

Hours before Mr. Netanyahu spoke, Iranian diplomats sought to make a pre-emptive strike of their own, calling him a persistent liar and warning President Obama not to allow the Israelis to subvert the positive spirit cultivated by Mr. Rouhani in his visit to the United Nations.