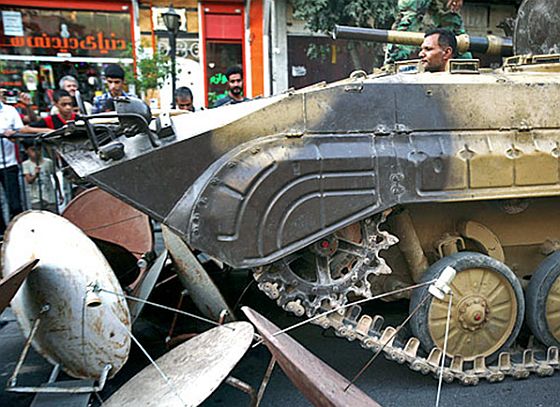 IranWire reports: Just two days after President Hassan Rouhani laughed off a question about access to satellite television in Iran during a press conference in New York, the Revolutionary Guards’ Fajr Brigade sent a tank into Shiraz to crush 800 pieces of satellite equipment.

“The Iranian government’s objective is to provide free access to information for the people,” Rouhani said during his Asia Society press conference. “Presently even Iranian villages have access to satellite [television]; all you have to do is to look at their rooftops.”

While period sweeps on satellite dishes and more recently satellite dish workshops are a feature of life in the Islamic Republic, a costly cat and mouse game between the authorities and citizens who seek free access to global culture and information, the Revolutionary Guards’ tank pageant is unprecedented in its violent show of force.

The timing raises questions as to whether powerful regime forces like the Revolutionary Guards will seek to obstruct his reforms and tar the image of moderation he seeks to present to the world. [Continue reading…]