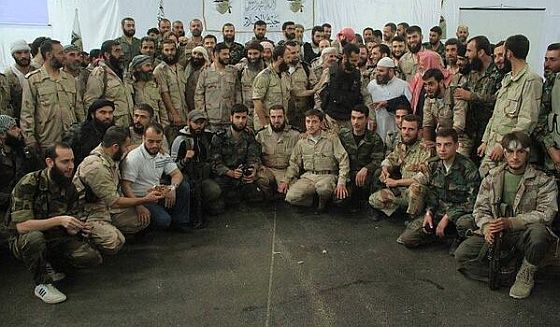 Jaish al-Islam commanders from 50 insurgent groups who merged on Sunday.

I suspect that for quite a few observers there’s something vaguely comforting about the spectacle of the rise of extremism in Syria. Why comforting? Because it reinforces the idea that however bad the Assad regime might be, the alternative seems destined to be worse. On that basis one can take comfort in the belief that the best course of action for those outside Syria is no action at all.

Indeed, the Assad regime itself seems willing to cater to those who want to balance both humanitarian and non-interventionist concerns through facilitating a symbolic intervention by destroying Syria’s chemical weapons arsenal. If the Syrian government is sufficiently cooperative in this undertaking it will no doubt earn qualified praise for doing so.

Which brings me to a headline in yesterday’s Washington Post: “Foreign extremists dominate Syria fight“. As if carried away by the sentiment in those words, the security analyst Matthew Aid then reposted the article on Tumblr with an even more sensational headline: “Most Fighting in Syria Being Done by AQ-Linked Militants, Not Free Syrian Army“.

The problem is, neither headline actually reflected the details of the report. No doubt Liz Sly, reporting from Beirut, wanted to convey some sense of Syria being taken over by foreign jihadists, yet the second sentence in her report acknowledges: “The number of Syrians battling to overthrow the regime led by President Bashar al-Assad outstrips by a large margin the thousands of Arabs and other non-Syrian Muslims who have streamed into Syria over the past two years to join in the fight.”

Further in to the report she says that conservative estimates put the number of foreign fighters at between 6,000 to 10,000 — though she fails to put that in context by referring to the estimated size of the fighting opposition: 100,000.

Supposedly, what is happening in Syria can only be comprehended in binary terms: Syrian vs foreign; moderate vs extremist; secular vs Islamist; Sunni vs Allawite. But the overarching effect of the imposition of these simplistic labels is to reinforce the sentiment that Syria is bad news and the less we hear about it the better.

On the other hand, for those who retain an interest in being provided with a more nuanced picture of what’s happening on the ground, there are commentators like Hassan Hassan who are capable of explaining some of the complexity in an ever-changing landscape while underlining the fact that whatever fissures do indeed exist inside the opposition, this remains a fight to topple the Assad regime.

Hassan notes that in the liberated areas of Syria, Salafi-leaning fighters are now dominant and among these the newly formed Jaish al-Islam (“the Army of Islam”) composed of at least 50 groups operating mainly around Damascus, has now displaced the FSA as the strongest rebel force.

The emerging trend, far from that of Syria being taken over by foreign fighters, may actually be going in the opposite direction:

Significant grassroots hostility is building in liberated Syrian areas against foreign-funded extremists and al Qaeda affiliates. These tensions do not always develop into sustained clashes — for almost all rebel groups, toppling the regime is the priority, not fighting extremist forces, which have proved indispensable in the battlefield.

According to an activist based in the northern city of Raqqa, when clashes erupted between the al Qaeda-affiliated ISIS and Ahfad al-Rasoul in August, local residents threw their support behind one or the other side — but the strongest condemnation was for the infighting itself. “When they see the regime’s warplanes shelling the city without a single shot in their direction, they get angry at the fighters who could do something,” the activist explained.

The size of extremist groups is not an accurate indicator of the support for their ideology within Syrian society. Fighting groups are also not ideologically homogenous, as many fighters join groups for their effectiveness on the battlefield and disciple — not their religious beliefs. Ahrar al-Sham members in Daraa, for example, can be remarkably different in terms of religiosity from members in more conservative northern areas such as Idlib or the Aleppo countryside.

The situation inside the country is more fluid and nuanced than many groups’ hard-line slogans would suggest. Moderates can be members of hard-line groups and vice versa. Some groups, such as Suqour al-Sham, include both secular members and Islamist veterans of the insurgency against the U.S. occupation of Iraq. For example, a former judge at Aleppo’s cassation court, a secular Syrian who does not pray, nevertheless supports an Islamic identity to the state.

For this reason, many moderate fighters are more concerned with the foreign networks and leaders than the rank-and-file members of hard-line groups. “We are not too worried about Jabhat al-Nusra,” said one FSA-affiliated officer in the eastern governorate of Deir Ezzor who said he worked in intelligence operations. “Once the fighting ends, we’ll bring them back. We know them. They’re our brothers, cousins, and neighbors — they’re the sons of our tribes. Our true struggle will be against [ISIS] and the Nusra leaders.”

1 thought on “Syria beyond the binaries”