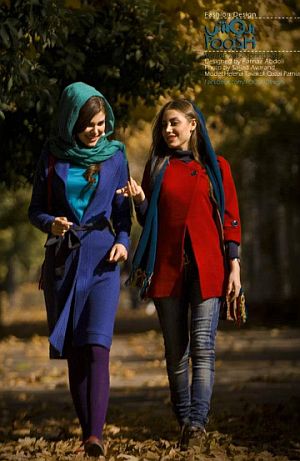 From the 2012 Fall collection of Tehran fashion designer Farnaz Abdoli.

The New York Times reports: Prime Minister Benjamin Netanyahu of Israel tried to take his campaign against the Iranian leadership to Iran’s young population last week, saying that if they were truly free, they would be able to wear jeans, listen to Western music and participate in free elections.

The problem is that Iranians do wear jeans and manage to listen to whatever music they want to listen to, just like people almost anywhere, except maybe in North Korea.

That is to say, Mr. Netanyahu’s effort at outreach backfired, as Twitter lit up Sunday with retorts.

“Netanyahu, here are my #Jeans and #Western music,” wrote a user named Sallar, posting a picture of his jeans and his iPad showing a pop album cover, and adding an insult to the prime minister’s intelligence.

A user with the handle mohhzg wrote, “Netanyahu, I’m wearing jeans like many old & young people in #Iran.”

Mr. Netanyahu made his faux pas — at least when it comes to Iranian fashion — in an interview Thursday with the BBC Persian channel, despised by the Iranian leadership because it allows the government’s adversaries direct access to the public.

“If the people of Iran were free, they could wear jeans, listen to Western music and have free elections,” he said, in an apparent effort to get the Iranian public to oppose the nation’s nuclear program. [Continue reading…]

In the interview, Netanyahu claimed, “I saw Neda,” images of whose death became an icon of the 2009 protests, yet he failed to notice that she, like hundreds of thousands of other Iranian protesters, were wearing blue jeans.

1 thought on “Netanyahu’s ignorance about Iran”