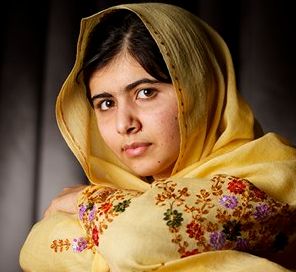 Kamila Shamsie writes: Malala Yousafzai says she’s lost herself. “In Swat [district], I studied in the same school for 10 years and there I was just considered to be Malala. Here I’m famous, here people think of me as the girl who was shot by the Taliban. The real Malala is gone somewhere, and I can’t find her.”

We are sitting in a boardroom on the seventh floor of the new Birmingham library, the glass walls allowing us a view of a city draped in mist, a sharp contrast to the “paradise” of Swat, with its tall mountains and clear rivers which Malala recalls wistfully. It should be desperately sad but the world’s most famous 16-year-old makes it difficult for you to feel sorry for her. In part, it is because she is so poised, in a way that suggests an enviable self-assurance rather than an overconstructed persona. But more than that, it is to do with how much of her conversation is punctuated by laughter.

The laughter takes many forms: self-deprecating when I ask her why she thinks the Taliban feel threatened by her; delighted when she talks of Skyping her best friend, Muniba, to get the latest gossip from her old school; wry when she recalls a Taliban commander’s advice that she return to Pakistan and enter a madrassa; giggly when she talks about her favourite cricketers (“Shahid Afridi, of course, and I also like Shane Watson”). And it’s at its most full-throated when she is teasing her father, who is present for part of our interview. It happens during a conversation about her mother: “She loves my father,” Malala says. Then, lowering her voice, she adds: “They had a love marriage.” Her father, involved in making tea for Malala and me, looks up. “Hmmm? Are you sure?” he says, mock-stern. “Learn from your parents!” Malala says to me, and bursts into laughter.

Learning from her parents is something Malala knows a great deal about. Her mother was never formally educated and an awareness of the constraints this placed on her life have made her a great supporter of Malala and her father in their campaign against the Taliban’s attempts to stop female education. One of the more moving details in I Am Malala, the memoir Malala has written with the journalist Christina Lamb, is that her mother was due to start learning to read and write on the day Malala was shot – 9 October 2012. When I suggest that Malala’s campaign for female education may have played a role in encouraging her mother, she says: “That might be.” But she is much happier giving credit to her mother’s determined character, and the example provided by her father, Ziauddin, who long ago set up a school where girls could study as well as boys, in a part of the world where the gender gap in education is vast.

It is hard to refrain from asking Ziauddin Yousafzai the “do you wish you hadn’t …?” question about his daughter, whose passion for reform clearly owes a lot to the desire to emulate her education-activist father. But it’s a cruel question, and unfair, too, given my own inability to work out what constitutes responsible parenting in a world where girls are told that the safest way to live is to stay away from school, and preferably disappear entirely.

It is perhaps because of criticism levelled at her father that Malala mentions more than once in her book that no one believed the Taliban would target a schoolgirl, even if that schoolgirl had been speaking and writing against the Taliban’s ban on female education since the age of 12. If any member of the family was believed to be in danger, it was Ziauddin Yousafzai, as much a part of the campaign as his daughter. And it was the daughter who urged the father to keep on when he suggested they both “go into hibernation” after receiving particularly worrisome threats. The most interesting detail to emerge about Ziauddin from his daughter’s book is his own early flirtation with militancy. He was only 12 years old when Sufi Mohammad, who would later be a leading figure among the extremists in Swat, came to his village to recruit young boys to join the jihad against the Soviets in Afghanistan. Although Ziauddin was too young to fight then, within a few years he was preparing to become a jihadi, and praying for martyrdom. He later came to recognise what he experienced as brainwashing – and was saved from it by his questioning mind and the influence of his future brother-in-law, a secular nationalist.

The information about her father’s semi-brainwashing forms an interesting backdrop to Malala’s comments when I ask if she ever wonders about the man who tried to kill her on her way back from school that day in October last year, and why his hands were shaking as he held the gun – a detail she has picked up from the girls in the school bus with her at the time; she herself has no memory of the shooting. There is no trace of rancour in her voice when she says: “He was young, in his 20s … he was quite young, we may call him a boy. And it’s hard to have a gun and kill people. Maybe that’s why his hand was shaking. Maybe he didn’t know if he could do it. But people are brainwashed. That’s why they do things like suicide attacks and killing people. I can’t imagine it – that boy who shot me, I can’t imagine hurting him even with a needle. I believe in peace. I believe in mercy.” [Continue reading…]