Malise Ruthven writes: Tolstoy’s novella Hadji Murad opens with the image of a beautiful thistle flower, wrenched from a ditch, that the narrator seeks to add to his bouquet. His effort to pluck it, however,

proved a very difficult task. Not only did the stalk prick on every side—even through the handkerchief I wrapped round my hand—but it was so tough that I had to struggle with it for nearly five minutes, breaking the fibres one by one; and when I had at last plucked it, the stalk was all frayed, and the flower itself no longer seemed so fresh and beautiful…. But what energy and tenacity! With what determination it defended itself, and how dearly it sold its life!

This late masterpiece, written in 1904 but never published in Tolstoy’s lifetime, was based on a real-life episode. In 1851 the Avar warlord Hajimurad al-Khunzaki, a confederate of the Imam Shamil, who led the resistance to Russia’s annexation of the Caucasus, betrayed his ally and went over to the Russians. In Tolstoy’s story he is driven by ambition, hoping to govern the Caucasian tribes under the “white tsar.”

The most telling portrayals in the story — apart from Hadji Murad himself, with his thistle-like mix of bravery, integrity, cunning, confusion, and childlike candor — are the complementary, almost symmetrical descriptions of Tsar Nicholas I and the Imam Shamil, both of whom are depicted as cold-eyed, ruthless autocrats who represent opposing forces of absolutism. As Tolstoy himself explained:

It is not only Haji Murad and his tragic end that interest me. I am fascinated by the parallel between the two main figures pitted against each other: Shamil and Nicholas I. They represent the two poles of absolutism — Asiatic and European.

The reality, however, was a great deal more complicated than a clash of absolutisms. Far from being the cold and ruthless autocrat depicted by Tolstoy, Shamil, as the murshid, or spiritual guide, of the orthodox Muslim Khalidiyya-Naqshbandiyya order, was a leader who sustained the loyalty of the warring Caucasian tribes by diplomacy rather than force. A Russian source described him as “a man of great tact and a subtle politician.” His charismatic appeal was underpinned by his reputation for piety and evenhandedness in dispensing justice in accordance with Islamic sharia norms. These had been severely tested when the Russians introduced alcohol into the region, corrupting, by sharia standards, the tribal chiefs who became their clients.

As a renowned warlord and tribal leader, Hadji Murad had been a Russian loyalist, defending Avaristan in the eastern part of Daghestan against Shamil’s encroachments. It was only after the Russians had replaced him as their client in Avaristan by a rival who had him arrested and abused that Hadji Murad responded to Shamil’s overtures and joined the jihad. 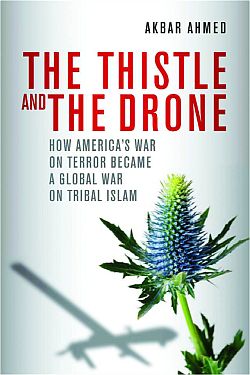 The result of his defection in January 1841 had been dramatic: by April Shamil ruled an area three times as large as at the beginning of 1840, with a cascade of formerly compliant clans joining the jihad. Hadji Murad’s rift with Shamil was a classic example of hubris. Hoping to be named his successor as imam, he refused to recognize the nomination of Shamil’s eldest son, Ghazi Muhammad. Faced with this challenge to his authority, Shamil convened a secret council that charged Hadji Murad with treason and sentenced him to death. Warned by friends, he redefected to the Russians in November 1851.

As an anthropologist with deep knowledge and direct experience of tribal systems, Akbar Ahmed demonstrates in The Thistle and the Drone how richly Tolstoy’s thistle metaphor applies to contemporary conditions in regions, distant from urban centers, where clans resist the writ of government while also engaging with it. He points to their “love of freedom” to act without external constraints, as well as

egalitarianism, [and] a tribal lineage system defined by common ancestors and clans, a martial tradition, and a highly developed code of honor and revenge — these are the thistle-like characteristics of the tribal societies…. Moreover, as with the thistle, there is a clear correlation between their prickliness, or toughness, and the level of force used by those who wish to subdue these societies, as the Americans discovered after 9/11.

Ahmed is especially troubled by the use of drones against Muslim tribal groups in Afghanistan, Pakistan, Yemen, and Somalia, but his analysis of the nature of the state and its relation with tribal peoples has application far beyond the condition of Muslim tribal societies. [Continue reading…]