The Syrian writer and political dissident, Yassin al-Haj Saleh, recently fled from Damascus where he had been in hiding for the last two years, and returned to Raqqa, the city of his youth where he hoped to be reunited with several of his brothers. During a grueling 19-day journey to reach the city, he learned that two of his brothers had been captured and that the city was now under the control of the Islamic State of Iraq and the Levant, al Qaeda. 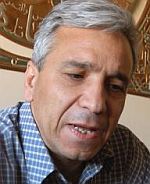 In Raqqa, I spent two months and a half in hiding without succeeding in getting one piece of information about my brother Firas. Nothing could be worse than this. Therefore, instead of celebrating my arrival at Raqqa, I had to keep in hiding in my own liberated city, watching strangers oppress it and rule the fates of its people, confiscating public property, destroying a statue of Haroun Al-Rasheed or desecrating a church; taking people into custody where they disappeared in their prisons. All the prisoners were rebel political activists while none of them was chosen from the regime’s previous loyalists or shabiha. With the exception of this flagrant oppression of the people, their property and symbols, the new rulers have shown no sign of the spirit of public responsibility which is supposed to be the duty of those who are in power.

I wished to stay in Raqqa for the longest possible time to understand why events had taken this turn and to form an idea about the new leaders. I was able to collect some useful information but not as much as I had wished because I was not able to explore the city’s streets and listen to the people tell me their stories, not to mention holding interviews with the Emirs of the State of Iraq and the Levant and their mujahideen.

Not to walk in the streets of Raqqa in autumn? This is not an adequate reason for leaving, yet it is quite important on its own for me. At the onset of the Revolution, I used to say jokingly to my friends: I wish to topple the regime so as to get a passport. I wanted a passport to feel free and to travel where I wished. Today I leave behind comrades who will carry the struggle on. Our presence together inside the country used to give us courage and the strength to continue. I do not feel bitter, but I am a little angry. I realize how impossible our situation has become, yet notwithstanding, I feel that whenever I am able to understand something or shed light on another, I believe I am taming the brutal multi- headed monster which wants to keep us in darkness, without the right to speak up, and not desiring but what it desires.

This is our country which is all that we have. I know that there is no other country that can be as merciful to us as this terrible country.