Matthew Shaer writes: Of all the citizen reporters I met, Jameel Salou was the closest to a traditional journalist. He was also the only one to encourage me to use his real name. “I have nothing to hide,” he told me. 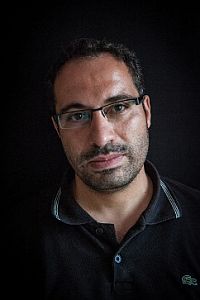 Salou, who is 33, had served several stints in jail. In 2000, he and some friends were arrested for running a popular news website, Eye on Syria. They spent five years in Sednaya Prison, where Salou was beaten so badly by the guards that he lost sight in his left eye. Later, he was falsely accused of planting a bomb in a Damascus square and held captive by a branch of the military security services for 40 days. “Before we went to jail, we hated the regime and we hated its corruption,” Salou, who is slouchy and round with thinning black hair, told me. “After being in jail, we wanted to try hard to topple it.”

In 2010, Salou reopened Eye on Syria, recruiting activists he had met in Sednaya. But in 2011, the office was shelled and all of the equipment was destroyed, so Salou set up a new operation called the Free Syrian News Agency.

He has since built a large network of unpaid informants. Using cheap Sony Cyber-shot cameras, they have documented the spread of the fighting from Damascus toward Aleppo and Homs. He is perhaps best known for his precise documentation of the Ghouta chemical attack, where he and 13 colleagues were able to identify many of the victims long before the United Nations arrived on the scene.

Although many of his colleagues cover the revolution only from the rebel side, Salou insists on broadcasting rebel misdeeds as well those perpetrated by the regime. When a rebel unit was accused of summarily executing Syrian army soldiers, the Free Syrian News Agency carried a report on the alleged crime.

Last year, Salou held a conference for female revolutionaries in the city of Rakka. The site of the conference was controlled by the opposition, but the fact that women were included rankled members of ISIS, who later grew angry with Salou for his efforts to tally the number of regime soldiers killed by rebels. Salou was arrested for the third time in his life, although “kidnapped” may be a more accurate term, since ISIS has no authority to arrest anyone. He was released only when an FSA commander intervened on his behalf.

In July, Salou fled Syria for the Turkish city of Antakya with his wife and children. He has received death threats, and in Reyhanli, where he travels regularly for work, he said that he has been trailed by ISIS sympathizers. “I’m sentenced to death from both sides,” he said. “By the regime and by ISIS. If either finds me, they will kill me.”

Unlike foreign journalists, who have the option of covering the civil war, many Syrian citizen journalists told me that they felt the war had been thrust upon them—that if they don’t publicize its atrocities, no one will. “Other people might forget, but we can never forget,” Salou told me. “Our duty is to be witnesses.” [Continue reading…]