This did not appear in The Onion — maybe that’s who WTOP’s J.J. Green writes for in his spare time.

It’s 9:51 a.m. on Aug. 23 at the Defense Intelligence Agency headquarters.

Army Lt. Gen. and DIA Director Michael T. Flynn surprises everyone in the room when he stands up and tells his staff, “Twenty minutes and I’ll be back.” 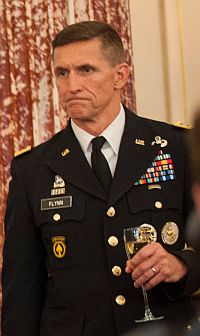 With several staffers trailing him, Flynn then sets out with this reporter for a secret place that no journalist has ever seen.

“I want to show you a place, because it will give you an impression … of our ability to watch the world,” Flynn says.

The fast-paced, unprecedented walk through one of the most secretive places in the intelligence community is punctuated by the fact that an audio recording device is allowed to capture it all.

“You’re moving from the new building, which is — we’re on Bolling Air Force Base — and you’re moving to the old building,” says Flynn as the tour progresses. Layer by layer, he unveils the DIA’s enormous global responsibility, which boils down to one thing: preventing the U.S. from being blindsided by strategic surprise.

This mission breaks down into further areas of focus, Flynn says.

“There’s something called tactical surprise, something called strategic surprise and there’s clairvoyance,” he says, keeping a steady pace and walking briskly toward the agency’s situation center.

Negotiating a series of elevator rides, floors, twists and turns in the building, Flynn points out the difficulty of clairvoyance.

“You just can’t predict the classic black swan or aw-shucks moment that occurs when you wish you knew what was going to happen,” he says.

Flynn believes in order to avoid tactical and strategic surprises, the agency has to be able to operate within and understand what’s happening in any given environment.

He points out that when looking at the ever-changing intelligence enigma that is today’s world, there often are missing pieces the DIA has to account for in its analytical efforts.

Dealing with “strategic surprise for me, it’s kind of like every day we’re trying to put together this 5,000-piece (jigsaw) puzzle but we don’t have the box top to look at,” Flynn says.

“As something begins to build up — it may be the underpinnings of an insurgency or the thriving or lack of or the hopelessness within a society — (those elements) start to tell us things about something that may happen or not happen in a particular environment.”

The DIA needs to know what’s happening everywhere at all times, so the agency has thousands of personnel spread out across 142 countries, in multiple war zones and simmering hot spots. This means there is a constant blast of information and threats flowing back to Flynn, and just as many decisions that have to be made.

Nearing the entrance of the situation center, he is asked how he keeps up with it all.

“Really trusting the leaders that we have” and rising very early each day, he says.

“It starts probably about 4:30 every morning,” Flynn says. “It’s like eating five meals a day instead of sitting down at dinner. It’s constantly being fed to you. I have to discipline myself in what I call my own battle rhythm.”

As the door to the agency situation center begins to slowly open, the rhythm he speaks of is clearly present inside this top-secret world.