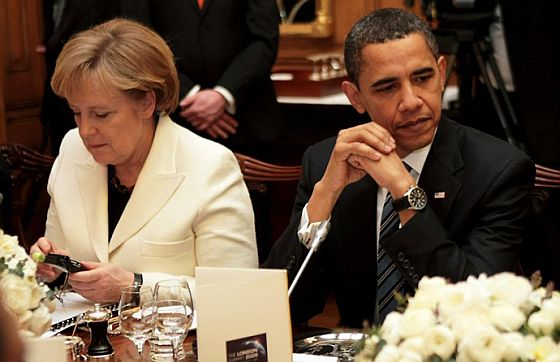 The Los Angeles Times reports: The White House and State Department signed off on surveillance targeting phone conversations of friendly foreign leaders, current and former U.S. intelligence officials said Monday, pushing back against assertions that President Obama and his aides were unaware of the high-level eavesdropping.

Professional staff members at the National Security Agency and other U.S. intelligence agencies are angry, these officials say, believing the president has cast them adrift as he tries to distance himself from the disclosures by former NSA contractor Edward Snowden that have strained ties with close allies.

The resistance emerged as the White House said it would curtail foreign intelligence collection in some cases and two senior U.S. senators called for investigations of the practice.

Precisely how the surveillance is conducted is unclear. But if a foreign leader is targeted for eavesdropping, the relevant U.S. ambassador and the National Security Council staffer at the White House who deals with the country are given regular reports, said two former senior intelligence officials, who spoke on condition of anonymity in discussing classified information.

Obama may not have been specifically briefed on NSA operations targeting a foreign leader’s cellphone or email communications, one of the officials said. “But certainly the National Security Council and senior people across the intelligence community knew exactly what was going on, and to suggest otherwise is ridiculous.”

If U.S. spying on key foreign leaders was news to the White House, current and former officials said, then White House officials have not been reading their briefing books.

Some U.S. intelligence officials said they were being blamed by the White House for conducting surveillance that was authorized under the law and utilized at the White House.

“People are furious,” said a senior intelligence official who would not be identified discussing classified information. “This is officially the White House cutting off the intelligence community.”

Any decision to spy on friendly foreign leaders is made with input from the State Department, which considers the political risk, the official said. Any useful intelligence is then given to the president’s counter-terrorism advisor, Lisa Monaco, among other White House officials.

When Angela Merkel phoned Barack Obama to tell him she didn’t appreciate being spied on by the NSA, it’s not as though Obama got blind-sided by the call. “You have a call on line one Mr President. It’s a woman with a German accent. She sounds pissed off.”

On the contrary, it’s reasonable to assume that Obama, in consultation with his staff, had time to craft a response, and if that response was not exactly crafted then it should at least have sounded halfway plausible.

Senior White House adviser: Just tell her you knew nothing about it but you promise it’ll never happen again.

Obama: But that’s going to sound like the lame excuse a 12-year-old would give in response to a reprimand from a school teacher.

Adviser: You got any better ideas?

The Most Powerful Man in the World: ….

What should he have said? How about:

I am aware of the reports you are referring to. I understand your concerns. I have ordered a comprehensive review of our surveillance policies and I am fully committed to taking whatever steps are necessary to restore trust between the United States and Germany. To that end, I’d like to invite you to send a team of your intelligence officials to meet their counterparts in Washington and in that context we will be able to address more specific issues and hopefully arrive at a common understanding.

You remain dear to my heart, Angela.

Well, maybe not the last bit.