The New York Times reports: Suncor Energy, Canada’s top petroleum producer, announced on Thursday that it would expand its oil production in 2014 by 10 percent in another sign that the Obama administration’s delay in approving the Keystone XL pipeline extension is not holding back growth in the western Canadian oil sands fields.

“We’re set for a strong year of continued production,” Suncor’s chief executive, Steven W. Williams, said. The company announced a capital spending program of $7.45 billion for 2014, $477 million more than it had forecast earlier this year.

Suncor, which is based in Calgary, produces oil and gas around Canada, and has operations in North Africa and the North Sea. But its oil sands operations are the main driver for the company. In the most recent quarter, its oil sands output rose 16 percent from the year before for a record of 396,000 barrels a day, nearly 20 percent of the country’s total oil sands production.

The company said it expected its oil sands production to increase again next year to 430,000 barrels a day.

Reports of increased production are coming even as Canadian oil executives are privately questioning whether the Obama administration will ever approve the Keystone XL pipeline, which it has been considering for more than two years.

The extension is intended to transport more than 800,000 barrels a day of oil sands output to refineries on the Gulf of Mexico coast, but environmentalists have made stopping the pipeline their top priority since emissions from oil sands production are higher than for most crude oils consumed in the United States.

But over the last several months, oil companies have sought to go around the dispute by announcing plans for three large rail loading terminals with the combined capacity of transporting 350,000 barrels a day.

The companies are poised to quadruple rail-loading capacity over the next few years to as many as 900,000 barrels a day, whether or not the Keystone pipeline is built. [Continue reading…]

It’s long been reported that rail transportation of oil was already making the construction of Keystone XL an issue of questionable relevance in relation to the environmental consequences of oil sands production, which makes me wonder why so much activist energy was focused on the pipeline. Was it simply because “stop the pipeline” is such an easy rallying-cry?

Ironically, the dangers posed by rail delivery of oil are probably far greater than those posed by Keystone XL as an accident in Alabama earlier this month made all too clear: 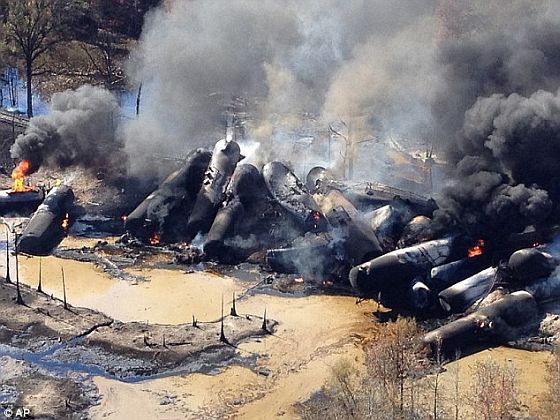