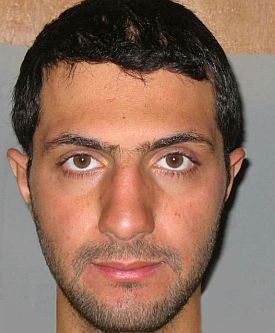 If this is indeed the leader of Jabhat al-Nusra, presumably it is not a recent photograph.

The Associated Press reports: The shadowy leader of a powerful al-Qaida group fighting in Syria sought to kidnap United Nations workers and scrawled out plans for his aides to take over in the event of his death, according to excerpts of letters obtained Wednesday by The Associated Press.

Iraqi intelligence officials offered the AP the letters, as well as the first known photograph of the Nusra Front leader, Abu Mohammed al-Golani, the head of one of the most powerful bands of radicals fighting the Syrian government in the country’s civil war.

The officials said they obtained the information about al-Golani after they captured members of another al-Qaida group in September. They spoke on condition of anonymity because they weren’t authorized to speak to journalists.

“I was told by a soldier that he observed some of the workers of the U.N. and he will kidnap them. I ask God for his success,” read an excerpt of a letter given by officials from Iraq’s Falcon Intelligence Cell, an anti-terrorism unit that works under Prime Minister Nouri al-Maliki.

The officials said other letters planned the kidnapping and killing of other foreigners, and Syrian and Iraqi civilians.

One U.N. worker was kidnapped for eight months in Syria and was released in October. Another two dozen U.N. peacekeepers were briefly held this year. It’s not clear if those abductions had any relation to al-Golani’s letters. [Continue reading…]